Tinker belongs to a race known for their superhuman intelligence, slyness, and a troubled relationship with magic. They find pride in using wisdom to survive, and using only natural sources of strength, unlocked through science and reason, raising the development of the whole nation to a new level. Yet, as Boush could demonstrate, even this good quality led to a great deal of trouble. Once a key researcher on the laws of nature, Boush led a large group of intellectuals, learning about how nature works. They set up a laboratory deep underground in the misty and rumored Violet Plateau.

According to rumors, this is a place to store ancient knowledge beyond the understanding of all things, and also a cemetery for those who come to this place by themselves. On the one hand, scorning wizards for the dangers they pose to the world, Boush and his associates Tinker inadvertently open a portal to a dimension beyond perception, and invites the nightmare of the world. themselves. A jet-black smoke rose from the cavern below the Violet Plateau, casting an eternal veil of darkness over the place, followed by endless horrifying sounds. Boush fortunately escaped with his quick wits, and the strange machines he brought with him, and became the only Tinker to survive the tragedy of Violet Plateau. 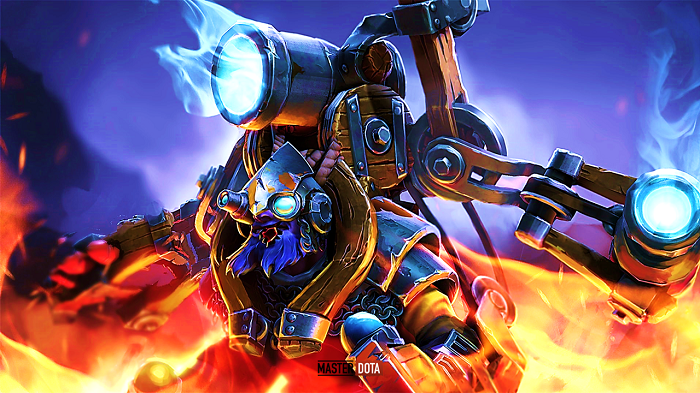 There are 2 ways to increase skills for Tinker:

– Tinker Ganker: By taking advantage of the powerful combo of Laser (Q) and Heat Seeking Missile (W), Tinker will raise these 2 skills first. Since Rearm (R) consumes a lot of energy and doesn't have much effect at level 6, we will raise it to level 9, then raise it to March of the Machines (E). Finally lift complete Rearm (R) and Stats. This increase is suitable when you play Normal or Rank single.

– Tinker Pusher: In pro matches, the fact that Ward from the opposing Supporter is always around makes Tinker's life by ganking difficult so Tinker will instead use March of the Machines (E) as an ability. farm lane and jungle to get early Boots of Travel and other gear. Laser (Q) and Heat Seeking Missile (W) lift depending on the situation (like the example in the picture below). Rearm (R) should still be at level 9 and last Stats.

Effect: Tinker fires a powerful laser that deals 80/160/240/320 damage to targets hit and blinds them, causing their physical attacks to miss for 3 seconds (6 seconds for minions)

March of the Machines

Effect: Summons an army of robots to destroy enemy units in a certain area around Tinker for 6 seconds.

Scope of development: Self.

Effect: Restores the cooldowns of Tinker's skills and equipment after 3/2/1 second channeling.

Effect: After channeling for 4.5s teleport to a target friendly structure. Level 2 allows teleporting to friendly units and Level 3 to friendly heroes.

Boots of Speed are basic mobility requirements for any hero. Getting them early on Tinker allows him to more easily position himself for casting his spells.

Null Talisman provides Tinker with more damage, which helps with last-hitting. As such, it is advised to start with a Null Talisman when playing mid, as the extra damage can make a huge difference against certain lane opponents.

Bottle is essential for a mid Tinker, as it provides HP and mana regen critical for allowing him to stay in-lane to farm. Bottle remains vital on Tinker throughout the game, as it extends his mana pool when teleporting forward to cast spells and speeds up healing in fountain, so consider dropping it in the Stash instead of selling it later.

Boots of Travel provide global mobility and map presence in the form of teleportation to any friendly building or creep. Combined with Rearm, Tinker can reposition himself globally at will to swiftly push lanes, join teamfights, and then return to the fountain to replenish his mana.

Soul Ring greatly extends Tinker's mana pool when teleporting around the map to cast spells, as he can dip into his HP pool to extend his active operation time. As he can reset its cooldown at will with Rearm, using Soul Ring once per cycle can give him vastly more mana to use. As well, he can offset the HP cost via the use of Bottle, keeping him at full HP even with regular use.

Blink Dagger drastically improves Tinker's mobility, and gives him great survivability when pushing lanes with March of the Machines. As it can be shift-queued after teleporting to the front lines, Tinker can instantly blink into the treeline to safely cast his spells without giving the enemy an opportunity to spot him.

Kaya grants intelligence and mana regen amplification so Tinker can use more abilities outside of base. The increased spell damage also helps with pushing waves and bursting heroes.

Aether Lens increases mana pool and cast range so Tinker can use Laser and March of the Machines from a safe distance.

Bloodstone greatly increases mana regen, which is quite useful for Tinker as he can quickly run out of mana.

Aghanim's Scepter gives Tinker a vast amount of teamfight contribution, as he can use Laser to blind and deal pure damage to multiple enemy heroes per cast, forcing them to dispel the debuff if they want to deal any physical damage, and bombarding them with long-range artillery using Heat-Seeking Missile.

Dagon is a very powerful burst damage nuke on Tinker that additionally increases the size of his mana pool as it is upgraded. Combined with Laser and Heat-Seeking Missile, it can instantly blow up lone targets, especially once combined with Rearm to increase the damage output by multiples.

Scythe of Vyse greatly improves the size of Tinker's mana pool, and gives him powerful mana regen, increasing the number of spells he can cast on deployments before returning to base. The Hex is extremely powerful as combined with Rearm it allows Tinker to permanently hard-disable an enemy for as long as he has the mana to do so.

Shiva's Guard gives Tinker much needed intelligence to continue use of Rearm, and gives him a magic nuke to assist in pushing. The extra armor and passive attack speed slow also give him resistance against physical damage if he shows up to teamfights, and the active nuke can be refreshed and cast multiple times.

Boots of Travel 2 is a useful upgrade to Boots of Travel for engaging in fights at inopportune locations. The ability to teleport to allied heroes rather than just creeps allows Tinker to bring instant reinforcements to any unfolding fight, particularly if they take place where there are no friendly creeps to jump to.

Eul's Scepter of Divinity is a good cheap mana item that gives Tinker good mana regeneration and a useful disable. Used properly, the Cyclone can be used to set up disables on enemies offensively, or buy Tinker time if he's caught while pushing a creep wave.

Glimmer Cape can be a strong survivability item, both for Tinker and his team. As he can constantly have the effect up with Rearm, Tinker becomes much harder to catch since the enemy must bring detection, and their magic nukes become far less potent for focusing him down. In fights, Tinker can use the active on multiple allies simultaneously, allowing him to either save them en masse or give them increased initiation ability.

Black King Bar prevents Tinker from being locked down in teamfights, particularly since Rearm is a channeled spell that can be interrupted. While it cannot be refreshed by Rearm, it can give Tinker the survivability he needs to cast his spells uninterrupted in a fight.

Lotus Orb is an extremely strong defensive item, both for pushing and for teamfighting. Echo Shell can prevent enemies from easily disabling Tinker, as using targeted disables or nukes reflects them back, disabling or nuking the enemy in turn and forcing them to reconsider the engagement. As well, since Echo Shell can be refreshed with Rearm, it can be placed on multiple allies at once, giving your team a strong edge in fights.

Ghost Scepter builds into Ethereal Blade and makes him invulnerable to physical damage. It can be refreshed to keep him safe from attacks.

Ethereal Blade does not give Tinker very beneficial stats, however it is useful for augmenting Tinker's already impressive burst magic damage against enemies, especially if he has built numerous intelligence items, and can be used on himself or teammates to grant immunity against physical damage. In a pinch, it can also be used on one of the enemy's carries to prevent them from attacking if Laser was already used on another target.

With Aghanim's Scepter, Tinker's Laser completely stops Chaos Knight's damage, forcing him to buy either a Black King Bar for his own survivability while leaving his illusions still vulnerable, or a Monkey King Bar leaving him still vulnerable to Tinker's nukes, though improving his damage.

Tinker rarely finds himself in the middle of a fight, which is where Chaos Knight typically thrives, and even in the rare cases of being so, at level 3 Tinker's constant rearm and blink away can kite and dodge Chaos Knight's spells reliably, so Chaos Knight has very little catch against Tinker's mobility. This gives Tinker impunity to create more chaos in a teamfight than Chaos Knight can control, laying down the field with March of the Machines and constantly being hit by rockets and lasers.

Blade Mail can reflect a lot of damage back to Tinker, especially while using March of the Machines.

Black King Bar makes all of Tinker's spells and items useless, because they are all magical and don't penetrate spell immunity.

Lotus Orb reflects his spells and items back onto himself.

You should pay attention to the minion stats to be able to quickly equip the equipment, but you should still use Laser (Q) when the enemy is about to last hit so that they will miss the minion stats. Heat Seeking Missile (W) has a very long range but requires vision to be able to shoot, please note this to not miss any delicious opportunities. Use March of the Machines (E) often because it is a very good tool to farm minions.

Complete Bottle, Soul Ring and possibly Boots of Travel if green. At this point you need to use a combination of Bottle and Soul Ring to be able to push minions and push as quickly as possible, interspersed with ganks if necessary, otherwise just keep pushing and farming to complete. into fast Boots of Travel. After having “flying shoes”, what you need to do is Teleport to a place where there are soldiers to farm or fight.

Launch skills or farm monsters, Rearm (R) + Charge the Bottle and Soul Ring to cast again. Cast the skill and then use Boots of Travel teleport back to the regen house to continue doing the same.

When you have quite a lot of equipment, what you need to do is toss skills (in order and equipment available) like some of the following examples:

March of the Machines (E) is now a very good tool to def, push or deal damage to AOE in total teamfights. Use them often after each Rearm (R). Control your energy intake to ensure that you always have it when you need it.