Pugna is known as a monster capable of causing fear at first sight. He was summoned back from the dead so what remains in his memory is very little. However, Pugna's magical power has not been lost.

Very brutal to his enemies, the power radiating from his flaming skeleton transported and trapped the enemy into another dimension and tortured him. He then sends them into a massive blast of energy for destruction. Fearful eyes are the methods that Pugna uses to suck blood, replenish life force to kill enemies.

As one of the nuking heroes possessing immense magical power, Pugna uses his own abilities to tackle the enemies he encounters in the arena. He swept and blew them away to contribute to the final victory for his team.

Two nuclear weapons are the most powerful skills Pugna possesses to oppose the enemy. Besides, in this champion's skill set, there are two additional skills that amplify damage and limit the enemy's magic power to help Pugna stay in lane better.

Pugna's power will be best exposed in the early-mid phase. Therefore, if you want to confront this champion, players must choose the generals that have the best early-mid countermeasures. 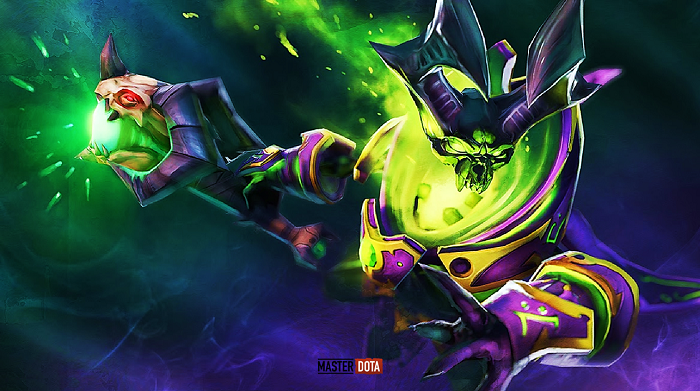 Each move gives Pugna its own power. If you want him to maximize his power, he must know how to increase his skills properly. In the guide on how to play Pugna dota 2, the masters recommend that you turn Q, W, E at the first 3 levels and increase the first Nether Blast max. Because this move can amplify your own strength and help you easily destroy enemies, especially in the early game. Decrepify increases next and maxes last Life Drain. Don't forget to increase Life Drain (ultimate) at levels 6-12-18.

Boots of Speed: Pugna's movement speed is increased with Boots of Speed, which helps him compensate for his poor defense.

Tranquil Boots provide increased movement speed and health regeneration, which may be shared on to allies via Life Drain.

Rod of Atos provides Pugna with characteristics as well as a root that may be used to keep foes down for Life Drain.

Orchid Malevolence: The stillness of Orchid Malevolence provides Pugna with a much-needed disable spell. Furthermore, the burst damage obtained when the debuff expires may be magnified, on top of the already amplified damage received from a Life Drain and Decrepify combo, which is very simple to do with the skill.

Black King Bar: Pugna is protected from being interrupted when channeling Life Drain because to Black King Bar's spell immunity. Enemies will find him nearly invulnerable to harm when paired with a self-cast Decrepify.

Bottle: The Bottle maintains life and mana while also allowing you to store runes for later use.

Aghanim's Shard: While channeling the primary enemy, Aghanim's Shard forces Life Drain to target additional enemy heroes, which is effective for both gaining extra health and diverting enemy attention away from allies, since they will be busy with stopping your cast.

Pugna is one of the easiest early games in Dota. You have an AoE spell to destroy a creeping wave and also damage your enemies in your lane, it will be very helpful in the laning phase to get the most hits and also can harass the opponent. And if someone is trying to gank you, you can use your Decrepify to somehow run away from gank. Maybe you can cast Decrepify to your chaser and make his movements slow so you can run away.

In mid game, usually people start to gank each other. What you need to do is to find the enemy to kill easy to start your team. Go to the target's lane and use Decrepify + Nether Blast + Life Drain to destroy the target. And always tell your friends to help you because maybe your combo is not enough to destroy your target so friends can help deal more damage.

In the late game you are becoming stronger than before. I assume you already have Aghanim Scepter and are ready to destroy enemies in teamfight. Before starting the teamfight, place your Nether Ward in a secret location and make sure your enemies can't see it so the ward will deal the damage and your opponent can't see it coming. You can use that to physically attack their Decrepify and make him unable to attack your party, and then you can use Nether Blast and also damage your opponent's Drain life. friend.