“The mist that chills you keeps me warm.”

The Drow Ranger was given the name Traxex – a name suitable for short Drows. However, Traxex is not a Drow. Her parents were murdered by bandits during a journey, whose brutal carnage caught the attention of the Drows who lived peacefully nearby. After dealing with the robbers, the Drows discovered the girl was hidden under the carriage, and they agreed that they could not abandon her. Despite being only a child, Traxex demonstrated the natural talents of a Drow: Mystery, silence, and sophistication. Although her physique is completely different from that of the Drow, her soul is like a lost Drow genius who has returned. But gradually she became more and more mature, her height gradually became superior to her family members and so she considered herself an ugly Drow. Though she had smooth skin and a lean build, she was completely free of the warts and rough whiskers of the Drow. Feeling herself becoming more and more distant from the Clan, she separated from them and lived alone in the depths of the forest.

Many travelers passing through the forest often say that they met a very beautiful sniper who quietly watched them from the trees, then disappeared like a dream before they could. approach. Subtle and mysterious, cold and hot she moved like a still fog. And if you hear the whispers, it's her cold arrows tearing the wind to find the hearts of enemies. 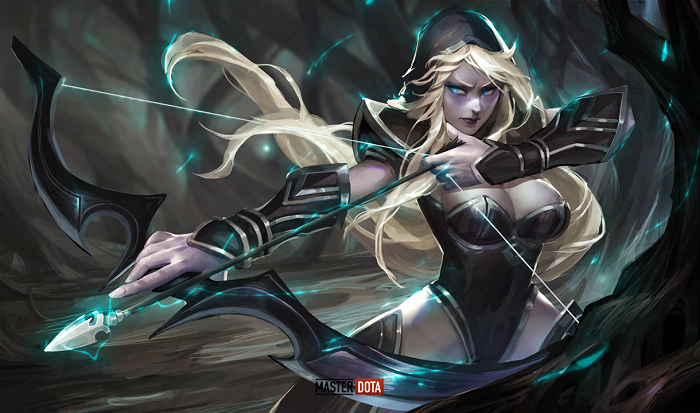 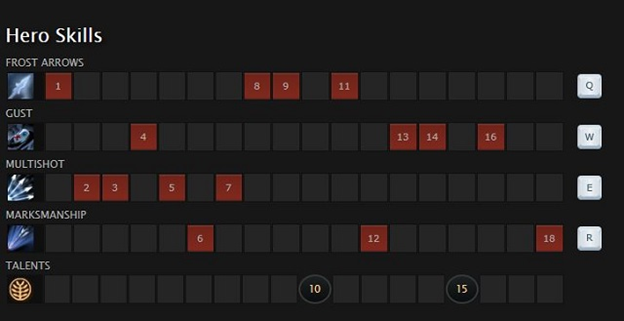 This is a popular skill increase for both ensuring the ability to chase, hold the opponent as well as the output damage of the DR, moreover with the addition of 1 Gust (W) at the first levels for DR. 1 bit of defense, blocking the enemy's muzzle and interrupting spell skills. Ultimate of course get the correct level.

Duration: 1.5 seconds on enemy champions and 7 seconds on minions and monsters

Note: this skill does not interact with items that have on-hit effects (lifesteal, slow, armor subtraction, ...)

Effect: blows a blast of cold air in the specified direction, knocking back and silencing enemy targets hit

Effect: Drow fires a barrage of arrows in rapid succession, doing more damage and causing Frost Arrows to last longer. This effect might last up to 1.75 seconds.

Effect: Increases DR Agility by 40/60/80 when there are no enemy champions near her.

Magic Wand: If the adversary uses a lot of spells, Magic Wand is an excellent choice since the burst heal might help her survive or win early bouts.

Dragon Lance: The improved range allows Drow Ranger to quickly establish ideal placement, while the Dragon Lance delivers useful stats at a moderate cost. It also enables her to out-range towers and demolish them without putting herself in harm's way. Upgrades to Hurricane Pike later.

Shadow Blade: Drow Ranger benefits from Shadow Blade's mobility and stealth, allowing her to reach an optimal position for team battles. It also gives you a boost in attack speed and damage.

Black King Bar: If Drow Ranger is up against a team with a lot of disables, Black King Bar will provide her ample time to deliver at least some damage.

Mask of Madness: Mask of Madness is an excellent source of lifesteal and may be used for farming. It also gives Drow Ranger a considerable increase in attack and movement speed, but at the cost of her being unable to utilize her Frost Arrows. It may be dismantled late in the game to make Satanic and/or Butterfly.

Diffusal Blade: Diffusal Blade allows Drow Ranger to use Gust to ambush an opponent hero, then burn away their mana during the silent phase.

Aghanim's Scepter: Drow Ranger's strikes are splintered by Aghanim's Scepter, striking two random troops near the original target. It's a poor improvement on its own, but when paired with many attack modifier items, it may allow Drow to wreak havoc on a huddled up opposing squad.

Mjollnir: If you're intending to build Aghanim's, Mjollnir is a good choice because it speeds up her early farming ability and the secondary splinter shots can trigger Chain Lightning.

Satanic: Drow Ranger gains a large amount of lifesteal for a brief period of time when she uses Satanic, allowing her to stand her ground and recoup nearly all of her health with just a few shots.

Manta Style: Drow Ranger gains mobility, stats, and the ability to dispel debuffs and create illusions with Manta Style. The item greatly enhances Drow Ranger's damage output, especially while sieging structures, because the illusions that spawn with it benefit from the Marksmanship agility advantage.

Eye of Skadi: If you're facing speedy and/or tanky heroes late in the game, consider using an Eye of Skadi. It has helpful health and mana for sustaining Frost Arrows for longer, and the slow stacks with Frost Arrows, decreasing most opponents' movement speed to a minimum.

It also has the benefit of lowering health regen, which makes it extremely useful versus tanks. Pick up Aghanim's Shard to slow down your target's regeneration even further.

Monkey King Bar: Monkey King Bar increases damage by a significant amount. It does not, however, give any defensive benefits, turning Drow Ranger into an even more dangerous glass cannon. Furthermore, Drow Ranger does not require it as a counter to evasive heroes, as she benefits from Marksmanship's accuracy.

Daedalus: Drow Ranger gains a critical strike chance from Daedalus, which works well with her attack speed and damage from her abilities, boosting her damage output.

The early game is when you should focus on farming, not being aggressive, you really don't have any defensive skills called high efficiency. DR's gameplay is quite boring at all stages, because other than "farm farm" with pushing turrets, DR's other abilities don't allow her to roam, gank or solo 1vs1 if there are too few items keep distance, farm safe, withdraw at the right time is what you need to do now. Wait until lv6, your ability to push lanes and farm minions will be improved by ultimate. You can use orb walk with Frost arrow (Q) skill to poke the enemy's health while lane.

This stage is the period when you farm intensively (or farm compensating if the early game is a bit slow). Ask your teammates to fully ward, pay attention to the minimap farm for safety, or push the lane to take down the enemy turret. You should note that your ultimate will lose its effect immediately if there are enemy champions nearby, even if they are in stealth, so pay attention to your stats if it suddenly changes unusual (surely someone is stalking you).

In small clashes, you keep a relative distance, combine the use of Frost arrow (Q) or turn off and then turn on the MoM to shoot because these two things do not stack together. Gust (W) all those close to you and then back to shoot again or run quickly after that if you don't want to die.

This is the time when you need to follow the team, or farm near your teammates so that you can receive timely support or assistance. If you go to split push, ask your support team to fully ward to ensure life.

In total combat or home defense, you take a favorable position to shoot, it's best to Gust (W) whoever is closest to you come out and shoot, remember to turn on bkb if it's on armor and back out if it feels unsettled. Your job in combat is just shoot and shoot, Gust (W) when needed and turn on Frost arrow (Q) to shoot running targets, that's it.