"Purer than flesh, stronger than bone, imperishable is the essence of the wraith."

King Ostarion spent countless years constructing his empire from the remains of his adversaries. It was an obsessional task carried out to fill the length of a monarchy that looked destined to last forever. He thought that he could not pass away as long as he continued to erect the towers of his palace. However, he finally realized that his delusion—that the bone could die—was unfounded. Deeply distrusting of flesh, he looked for a more long-lasting means of extending his rule and finally decided to pursue wraith energy, a type of pure spirit released by some dark souls upon passing. He believed that if he infused himself with Wraith Essence, he could build a body that was as brilliant and immortal as his ego.He consented to a ritual of change on the millennium solstice known as Wraith-Night, ordering his minions to gather enough souls to support his desire for immortality. Nobody is aware of the exact number of his warriors who perished since the Wraith King, who rose with the sun the following morning, was the only important survivor. He no longer spends much time sitting on his glimmering throne, preferring instead to walk around with his sword drawn and demand allegiance that goes well beyond death. 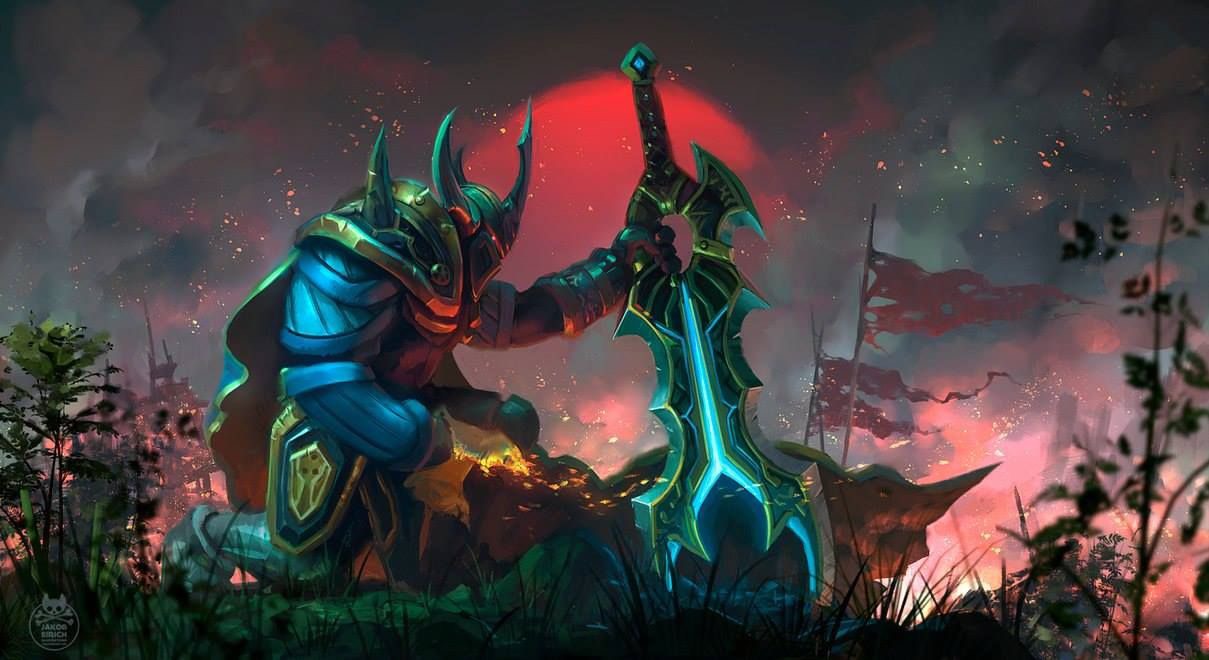 In general, your leveling priority of R>E>W>Q. Reincarnation can occasionally be bypassed until levels 8 or 9, but generally speaking, you should level it, especially if you face a high probability of passing away. The fundamental idea is that by maxing Mortal Strike, you increase your likelihood of dealing critical damage and gain access to skeletons, both of which are incredibly helpful for farming. Additionally, Vampiric Aura's additional damage and lifesteal give you the endurance needed for farming.

However, in general, you receive a point in it to battle for runes first, then max your damage and farming spells. If you have a fully free lane with no chance of killing anyone, you can even skip Wraithfire Blast.

Effect: With ghostly fire, Wraith King pierces an opponent unit, dealing damage and stunning the victim before dealing damage gradually and slowing it.

Effect: Depending on the harm the Wraith King causes when assaulting enemy units, restore health. Skeletons may be summoned by casting Vampiric Spirit. Vampiric Aura adds a skeleton charge for each two kills Wraith King or any unit under his control score against adversary troops. When killed, skeletons only reappear once.

Effect: Wraith King has a passive ability that increases damage on attacks with cooldowns.

Effect: When the Wraith King is killed in battle, his body reassembles after death, enabling him to rise again. Enemy troops within a 900-meter radius will slow down after death.

Magic Stick: Can can mean the difference between a kill and a death. Usually, its active provides enough mana to keep Reincarnation going. As one can disable, use Magic Stick, and then reactivate it to buy enough time for it to offer the 500 additional HP, it also works in conjunction with the Armlet of Mordiggian toggle.

Boots of Speed: Give any hero a fantastic boost in speed.

Clarity: Maintains mana while jungling, where hero damage is less likely to cancel it.

Radiance: Rushing this item after upgrading your boots will make Wraith King an incredibly quick farmer and it gives amazing teamfight presence, which is prolonged by his reincarnation. Skeleton charges are useful for stacking when taking out weak units, and during chases the AoE burn will also take out blink daggers on fleeing foes.

Magic Wand: Provides a similar kind of advantage to the Magic Stick, but it also offers a few more features. It makes excellent use of the Iron Branches that were previously purchased, providing place for new goods.

Phase Boots: Provides defense and damage to aid in lane conflict. Wraith King can stay on targets in battles even while Wraithfire blast is on cooldown thanks to his increased speed and phased movement.

Power Treads: If the treads are switched to intelligence before performing a spell, he gets attack speed and attribute switching to stretch his meager mana pool further.

Armlet of Mordiggian: Gives a lot of damage at a fair price, and Vampiric Aura and Reincarnation lessen the health loss. With Desolator, this item produces greater critical hits and heals with Mortal Strike and Vampiric Spirit.

Blink Dagger: Enables the Wraith King to move more freely, allowing him to fight and pursue targets more successfully and to flee after reincarnating.

Desolator: Destroys armor, increasing the lifesteal of Vampiric Aura and the damage output of Wraith King and his skeletons.

Assault Cuirass: Helps Wraith King with his armor issues and increases his, his teammates', and his skeletons' damage output.

Black King Bar: Provides the Wraith King with spell immunity, allowing him to withstand disables and mana breaks and continue to do damage.

Heart of Tarrasque: Wraith King's excellent health pool and regeneration make him difficult to kill, and his ability to reincarnate prolongs his useful presence in battles.

Blade Mail: Gives him a respectable armor and damage boost while deterring his attackers from kiting and focusing on him.

Heaven's Halberd: Provides Wraith King the ability to disarm an opponent carry, cutting down their main source of damage output, and gives him strength, evasion, and status resistance to tank up.

Abyssal Blade: When combined with Wraithfire Blast, Wraith King has a significant degree of lockdown potential, and the bash improves his ability to manfight.

Aghanim's Scepter: Can ensure an ultimate cast or some additional damage for Wraith King and his allies, but its stats aren't much use to Wraith King.

Refresher Orb: Is highly situational because it allows him to utilize Reincarnation twice in a single battle, extending the duration of his damage output.

Divine Rapier: Combining this ability with Aegis of the Immortal and/or Refresher Orb will produce the best results; it deals damage that works in conjunction with Vampiric Aura and Mortal Strike and is not dropped if Reincarnation occurs.

Manta Style: Due to his single-target skills and immobility, he poses a challenge to Wraith King.

Book of the Dead

Book of the Dead: The Wraith King's mana can also be burned by summons, stopping him from reincarnating.

Scythe of Vyse: Allows Wraith King to get focused when defending for a full three seconds.

Spirit Vessel: Hinders his ability to sustain his own lifesteal, making it more difficult for him to soak area damage.

Eye of Skadi: When gained by a ranged-capable hero, it keeps him at a distance and lowers his lifesteal power.

Battle Fury: Skeletons must be eliminated through area harm.

Heaven's Halberd: Permits the user to avoid and defeat the physical attacks of Wraith King when he engages in a pursuit.

Ghost Scepter: Protects against physical strikes from the Wraith King, but isn't completely protected from magical damage from Wraithfire Blasts. Instead of being a last resort, it must be used as a counterattack.

Gaining experience and final hits are your key priorities in the early going. You'll be vulnerable to ranged adversaries who may harass you from a safe distance since you're a melee hero. But because you have a stun, you can usually kill most opposing heroes with the aid of your support. This will enhance your overall damage output and farming speed since you'll be maxing your Mortal Strike first. It's important to consider the damage from critical strike because it makes you hit incredibly hard and most opponents won't anticipate the amount of damage you'll deal.

The produced skeletons are useful for farming as well as for concentrating an enemy hero. When casting Wraithfire Blast, keep in mind that the skeletons will focus the target you choose, so you can choose a different adversary to focus. If they have enough vision, they can also be utilized to farm neutral camps or the lane while you're in another location. While Vampiric Aura will help you maintain your health, if you're continually being bothered, you'll need to spend gold to use your courier to receive extra regeneration. Avoid going overboard with regeneration because returning to base will cost you extra gold and experience.

Once you have your Ring of Health, you shouldn't be frightened to go jungling. It is the preferable option to choose if you can't get last hits in your lane. Additionally, do not be scared to change lanes because the offlane is safer and their tower has already been destroyed. Switch lanes with your teammates so they can continue fighting while you farm. They are stronger than you and you are simpler to harass.

You should keep your attention on farming while also assisting your squad as needed. One of the benefits of the Wraith King is his ability to travel, aid his team in battle, and have his skeletons continue to work as farmers. Try to make a rapid assessment of the fight's value; if you're certain it won't be one worth your time, it could be best to continue farming instead, as losing a fight and possibly getting killed is not ideal. Once you have Radiance, you will pose a serious threat to the adversaries.The Radiance will be more potent the earlier you obtain it. You can start harvesting much more quickly if you have Radiance, and you can already engage in combat more skillfully. Despite the fact that you'll feel and seem strong, be careful not to overdo it in battle. Even though you might appear unbeatable, in unfavorable circumstances, attackers might take you out and gain a lot of gold while also lessening your visibility on the map and farming time.

When your team has won a battle, be sure to capitalize on the opponent heroes' downtime. If you want to help your team while the map is still open, destroy towers, kill Roshan, farm the enemy's neutral camps, and plant wards. By not wasting time and attempting to be as effective as you can, you should never return to farming your own jungle when you can defeat significant objectives.

Reincarnation can offer your squad extra time to get to you and assist before you are reincarnated, so keep that in mind if you get caught and killed. Try your best to run in the direction of your squad while dodging opponents to get to a place where you can meet your comrades. Even though you have a high damage output and are difficult to kill, your team's support makes you more powerful. It's also critical to be aware of how the enemy are using their mana, as doing so could render your Reincarnation utterly ineffective.