How long has it been since he lost his true name? He himself did not clearly remember his torn soul and body.

He could only vaguely remember the armor, the flags, and the gloomy faces of his comrades. Yes, he remembered that campaign: fear and misery, like a pair of pale hands pulling him down from his saddle. He still clearly remembered himself and his brothers, being thrown into the deep black hole of Death, remembering that he was bitten until there was nothing left but the sound of Soul Chasers' ears.

In that place deeper than the darkness, time has abandoned them. Thought has abandoned them. Reason also abandoned them. Hunger is the only thing that survives. They lunged at each other with fingernails and teeth. And then, the Quest of Souls arrived, sounding far away at first, and then, becoming immortal and unstoppable. The chorus was suddenly lifted, forming a wall of sound that blocked all of his thoughts, until no other thoughts remained. When he was possessed by the Soul Pursuit, he also opened his arms to the God of Death with his body destroyed.

However, Death did not kill him. Death wants to make war. In a vast and deep space, he is tasked with resounding the Soul Pursuit throughout the world, causing death to swallow all life. He became Undying, the vanguard of Death, to live and die and come back to life every time his body fell. He forever walked weary feet on the endless road of death, with the sound of the Soul Pursuit never ending. 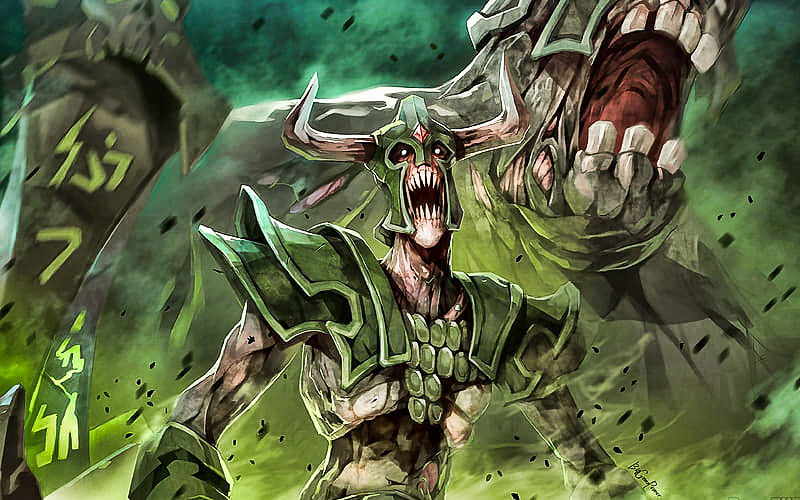 Many of you will make the mistake of Undying's main source of damage. In pub games, I often see them max Decay (Q) first, really, this skill only increases his tanking ability and the initial poke but not the finishing ability. consumes, and consumes a lot of mana.

Undying's main source of damage is from Tombstone (E) and Soul rip (W), so these two skills will be raised in parallel, moreover with Soul rip (W), you can guarantee the ability to deal damage /heals in lane and in combat, combines well with Tombstone's zombies (E). Ultimate get the correct level.

Effect: deals 20/60/100/140 damage to the target area, if there is an enemy champion in that area, he will steal that champion's Strength stat for 1 duration.

Effect: drains some of the life energy of nearby units (including allies) to deal damage if it's an enemy, or heals if it's a designated ally.

Effect: summons a tombstone, from this tombstone will create zombies that attack targets that are enemies in the affected area and continue to spawn zombies until the time expires. or destroyed. Zombies will gain attack and movement speed based on the amount of health their target has lost.

Zombie creation time: immediately upon casting and every 3 seconds.

Note: each zombie generation, this tombstone will give each enemy standing in the affected area a zombie stalking and then every 3 seconds. Gravestones do not create zombies when enemies are out of sight. Undying can buff the health of tombstones.

Effect: transform into a giant zombie spreading disease on the battlefield. During this time or until death, enemies around him will have their Movement Speed slowed, take 1 % more damage if attacked from any damage source, and when an enemy is attacked. When an enemy falls, he heals for 1 more health based on % of his maximum health. Effect decays on enemies far from Undying.

Effect duration: 30 seconds or until death.

Observer Ward: Undying and his teammates may efficiently gank adversaries thanks to Observer Ward's vision.

Infused Raindrops: Undying may utilize Infused Raindrops to regenerate mana at a low cost in the early game, when he wants to spam spells. The magic damage block also increases his tankiness, allowing him to cast more Decays and Soul Rips during battles.

Magic Wand: The Magic Wand bestows abilities as well as a means of restoring health and mana.

Mekansm: Undying and friends benefit from Mekansm's qualities, such as health restoration and armor.

Soul Ring: The Soul Ring generates mana on demand and provides some strength and health regeneration.

Blade Mail: Blade Mail provides armor and returns damage to foes, dissuading them from attacking Undying. It's exceptionally powerful when used in conjunction with his Flesh Golem form, since Undying gains additional health during the change.

Spirit Vessel: Spirit Vessel may heal Undying and allies, or it can be used in conjunction with Soul Rip to boost damage output in battles.

Pipe of Insight: Undying and teammates get magic resistance from Pipe of Insight, allowing them to stay alive longer in teamfights.

Black King Bar: Decay and Soul Rip are not disabled by Black King Bar, which prevents disable-heavy teams from shutting them down.

Holy Locket: The Holy Locket provides various benefits, including enhanced health and mana, partial HP regeneration, and other stats. The active ability may restore up to 300 health and mana with the maximum number of charges. Undying additionally benefits from the 35 percent heal amplification because it increases the amount of outgoing healing from Soul Rip, Mekansm, and the enhanced Guardian Greaves, allowing for massive burst healing.

Lotus Orb: Undying benefits from Lotus Orb, and Echo Shell makes disables and nukes more damaging to the caster than to the target.

Manta Style: Manta Style may be used to take out the Tombstone.

Scythe of Vyse: Undying is crippled by Scythe of Vyse since he relies on his talents to stay alive in a team battle.

Undying can go dual lane or solo hard lane, you should pay attention to the physical damage because during the match, Undying's armor depends a lot on equipment due to the amount of Agility per level is too low. In lane, you use Decay (Q) to poke the enemy's blood so that you can stick 2-3 to get a decent amount of health and damage, helping the turret be better. If you have the support of your teammates, you can easily defeat the enemy when their health is too low due to the influence of Decay (Q).

When the enemy is active, release Tombstone (E) then stand with them with Decay (Q) and Soul rip (W), make sure they don't die or get injured if you are strong enough (this method is based heavily on the stats you steal). Tombstone skill (E) you should put it in the woods or in a hidden corner to avoid the enemy breaking the tombstone. When you reach level 6 and raise your ultimate, ganks or chaotic fights are always what you look forward to the most.

The requirement when picking Undying is that you must always be present with your teammates for him to maximize his ability, because basically, his skill set is not at all for solo dueling, but for fighting. : gank, combat, push. Town portal scroll is an indispensable item in your inventory right now. When fighting, it is still the fact that you use Tombstone (E), Decay (Q), Soul rip (W) at the right time, at the right place, at the right time and with the right object, the opponent will have a hard time resisting the team when a zombie is standing there, the little zombies are just rushing out to bite. Very effective when pushing or teamfight.

Soul rip (W) is a skill that deals great damage as well as heals a lot for yourself or your teammates with a very short cooldown when maxed out (6 seconds), can be used to finish, save yourself or a teammate. During this time, ensuring your mana stat is extremely important for you.

If you already have Aghanim's Scepter equipped, the longer you stay in combat with the Flesh golem (R), the more beneficial your team will be. Most of the team fights at the end of the game, you should use your skills and equipment to support your teammates, the ability to recover depends on the number of fallen units, but help them deal a lot of damage. In teamfights, multiple kills will ensure this. To win is the most important thing, so don't be selfish and use Soul rip (W) ks or damage enemies :mrgreen: :mrgreen: . Undying def/push is quite easy thanks to Tombstone (E). He lives and dominates through combat, you should remember that to be able to play this hero well.