“Some say that this world will end in red fire. To me personally, that sounds great.”

The confrontation between Lina the Slayer and her sister, Rylai the Crystal Maiden, which began when the two were quarreling with each other in childhood, has become a legend widely circulated around the world. . Lina has always had the upper hand, however, at the same time, Rylai has always been sincere and innocent, having controlled Lina's "fire" temper with her intelligence and sociability.

After the two destroyed more than half of the house with ice and fire once, their parents were furious and realized that only separating the two could make them peaceful. As an older sister, Lina was sent to the far South to live with a patient aunt. From then on, she resided in Desert the Misrule - a kingdom always filled with scorching heat. Having said that, the climate of this place makes Lina the Slayer feel extremely happy and comfortable.

She came, causing this sluggish and boring country to suddenly erupt into a big shock. Many men want to pursue her, but they all have to leave struggling with damaged confidence, burned fingers or only one eyelash.

Lina is extremely confident and arrogant, nothing can make the "fire" in her stop burning. 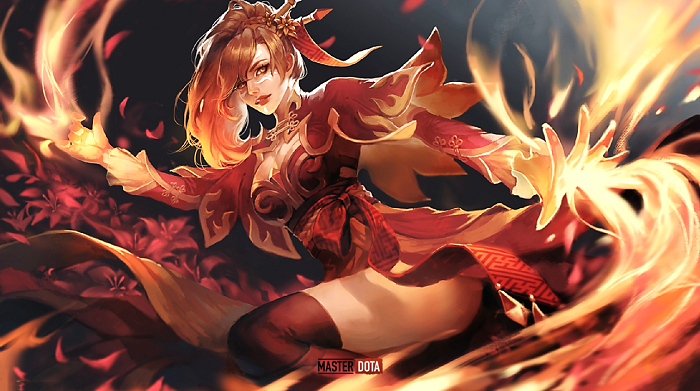 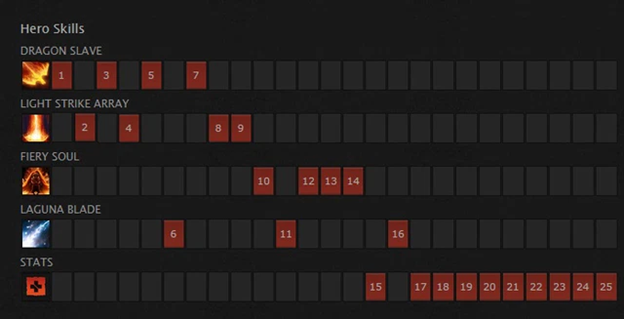 Effect: Launches a blast of flame in a straight line, dealing damage to all enemy units it passes through. Deals 110/180/250/320 damage.

Does not penetrate magic immunity state

Effect: Creates an explosion at the target location, dealing 80/120/160/200 damage and stunning all enemies inside the explosion.

Note: there is a 0.6 second delay when using the skill, so if you feel you're not aligning correctly, you have 0.6 seconds to press the S button to cancel (mana and cooldown will not be counted) to properly align

Does not penetrate magic immunity state

Effect: each time Lina casts a spell, she gains attack speed and movement speed, stacking 3 times for a duration.

Does not penetrate magic immunity state, is blocked by Linken's Sphere

Magic Stick: Lina is squishy, and she has a lot of high-cost, low-cooldown spells, thus Magic Stick comes in handy. Obtaining the Magic Stick will considerably boost her early staying power.

Boots of Speed: Lina may use Boots of Speed to get into position to land her abilities while staying out of danger zones.

Bottle: Lina's go-to selection while she's in the middle lane is a bottle.

Arcane Boots: Arcane Boots is a viable option, especially for a Lina who is more concerned with assistance.

Bloodstone: Lina's mana problems may be solved with Bloodstone, as well as her low HP pool. She can retain her full stacks of Fiery Soul without running out of mana throughout the following team battle if she has enough charges.

Blink Dagger: Lina can use Blink Dagger to remain in the background and then blink in at the right time to cast her Light Strike Array before the adversary notices it and evades it.

Aghanim's Scepter: Lina's Laguna Blade damage is roughly increased by another ability point, her durability is increased due to the increase in her characteristics, and her damage remains relevant even against Black King Bar users in the mid or late game thanks to Aghanim's Scepter.

Shadow Blade: Shadow Blade is helpful for carrying Lina since it allows her to cast Light Strike Array while remaining invisible and offers her a means of escape.

Scythe of Vyse: Scythe of Vyse provides a critical disable for her squad, as well as assisting her in landing Light Strike Array. Additionally, its attribute enhancements will increase her survivability and dramatically improve her mana regeneration.

Crystalys: When used as a semi-carry Lina, Crystalys delivers a significant damage increase and may be upgraded to Daedalus.

Black King Bar: Lina's Black King Bar is occasionally picked up when she's carrying, particularly against teams with a lot of disables.

Rod of Atos: Lina gains a bigger mana pool, which becomes more crucial as teamfights get more mana-intensive and Laguna Blade becomes more mana-intensive, as well as a huge boost to her low HP pool with Rod of Atos. Its active effect can also help her land her stun, and it has a short enough cooldown to do it virtually as soon as Light Strike Array returns from cooldown.

In the early game, farming and controlling runes are important. If you get the right runes for ganking (Haste, Double Damage, Invisibility) you can reverse the gank right away (remember to buy the bottle early) and farming at this stage is very important because between and At the end of the game, you will have to gank continuously, there is no chance to farm.

When in lane, you can sometimes use Dragon Slave (Q) to poke the enemy's health and eat minions, but don't overdo it because your mana is not water, even pushing the minion high you need to have full vision to be able to play aggressive, so ask your teammates to buy wards or buy them yourself when you reach lvl6 you can instantly kill the guy in the lane with your combos.

This is the stage where you and your teammates do long ganks and turrets, and do a few small teamfights as well. In the teamfight you should watch to stun those who jump at your teammates (easiest) or try to stun multiple targets, then use Dragon Slave (Q) and Laguna Blade (R) to finish, before the fight you can poke enemy health with Dragon Slave (Q). During this phase, remember to fully ward and use Smoke of Deceit to gank if necessary, the goal is to beat the enemy as much as possible so that the carry can farm comfortably or end the game early.

This phase is the phase of teamfights and total turret push when both sides already have quite a bit of equipment, what you do now is very simple: use effective stuns and finish 1 target as quickly as possible. with your damage skills and then run away (with enough items, your attack speed is 0.34 seconds for 1 shot). Lina's attacks are also quite poor now (that's the nuker, semi-carry), remember to use the skills intermittently to keep the stack of Fiery Soul (E) to the maximum.