+20 Finger of Death Damage Per Kill

Once honored as a great master in the mysterious Demon Witch field of magic, Lion fought with his brothers for light and right. However, the words of flattery made him fall. Born with ambitions beyond his own power, the mage was seduced by a demon, turned evil, and sold his soul in exchange for glory. After committing terrible crimes, Lion's soul was deeply wounded, and the demon immediately abandoned him.

And that same demon made a more profitable trade with Lion's enemy. In a fit of rage, Lion chased the demon all the way to Hell, crushing it, tearing it to pieces, then took the demon's arm and built it for himself.

However, fusing with the devil would come with a heavy price. Lion was transformed by the process, becoming something no one else could recognize. After returning from Hell, as if a rage entered his body, the Lion slayed all those who had honored him, also desecrating the land he once worshiped.

Currently, he is the only survivor of the mysterious Demon Witch art, and everyone who wants to become his assistant or disciple will be sucked out of his magic power and torn to pieces. particles of dust fluttering in the wind. 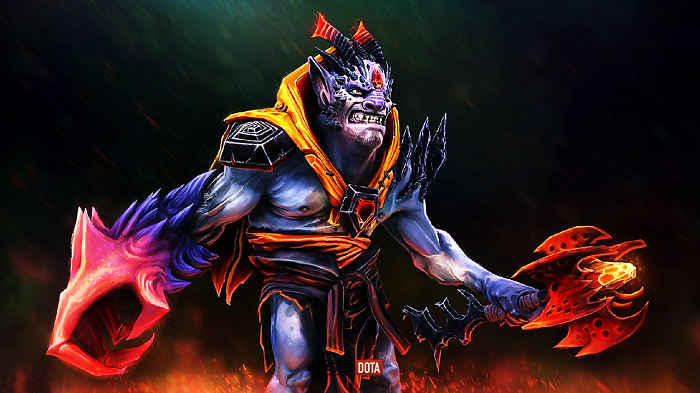 Get 1 Earth Spike (Q) at first level and max it out at first to benefit from damage and stun. Hex (W) has an effect time at first level up to 2.5 seconds so you only need to get 1 point at early levels. Mana drain (E) is a very good mana recovery skill for Lion with a fairly fast cooldown, making up for the mana cost of his skills so you raise the next max, moreover with the ability to stun and disable, Lion can easily cause the enemy's mana to drop rapidly, making them unable to use skills. Ultimate of course get the correct level.

Effect: shoots spikes that spring up from the ground, knocking enemies into the air, dealing 80/140/200/260 damage and stunning them

Effect: Turns the enemy into a harmless frog, blocks the ability to dodge and block damage and reduces the target's base movement speed by 100

Note: this skill will destroy clones instantly if you use them.

Effect: drains 20/40/60/120 mana per second from the targeted target until the duration of the effect or the target runs out of mana (doesn't affect units that have no mana). The opponent can run away from Lion to interrupt this skill

Note: this skill will destroy clones instantly if you use them.

Effect: unleashes a powerful blow from his demonic arm to the specified target, dealing 600/725/850 damage.

Magic Stick: Magic Stick provides Lion with a burst of life and mana, which is useful for low-HP casters whose spells may make a big impact in teamfights. While a fully charged Magic Stick does not guarantee that Lion will be able to perform another spell if he runs out of mana, it can afford him a few seconds to contribute more in a battle or flee from pursuers.

Boots of Speed: Because of Lion's strong disables, it's critical to gain Boots of Speed early. Lion can pursue down adversaries and get into position to cast his disables faster, scoring early kills for his squad.

Magic Wand: Magic Wand is a fantastic upgrade for more characteristics and charges, and it's always beneficial against hard supports. Its low cost makes it ideal for Lion, who may not always have enough money to purchase better equipment.

Tranquil Boots: Tranquil Boots' passive life regeneration keeps his health pool full, which works well with Mana Drain's ability to keep his mana pool full. He can wander and position himself better now that his movement speed has risen.

Blink Dagger: Blink Dagger is a very strong item for Lion, and it should be regarded as a must-have regardless of his farm condition. He can utilize Hex and Earth Spike considerably more effectively now that he can instantaneously leap on top of adversaries, dramatically improving his chances of killing the adversary.

Sentry Ward: As a support Lion, Sentry Ward is critical to have on hand. As a ranged hero, Lion may demolish enemy Observer Wards he encounters, robbing the opponent team of map view.

Town Portal Scroll: The Town Portal Scroll should be carried with you at all times. If Lion is present, his nuking and disabling abilities let him to totally flip ganks and teamfights around.

Force Staff: Lion's Force Staff is a versatile utility and mobility item that gives him greater mana, basic damage, and life sustain. It may be used as a cheaper alternative to Blink Dagger or as a supplement to boost Lion's mobility.

The active may also be used to assist friends in repositioning as needed, or on an adversary to dispose of them or shatter their Linken's Sphere before other disables.

Glimmer Cape: The Glimmer Cape provides Lion with a lot of utility as well as considerable initiating power. Lion can utilize the active to approach gank targets secretly and get close enough to throw his disables, and it can even be employed as a shield while channeling Mana Drain.

It may also be thrown on allies who have been caught off guard, offering them invisibility and considerable magic resistance to help them in escape.

Aghanim's Scepter: Finger of Death's killing power is considerably increased, and its cooldown is drastically reduced, allowing it to be employed tactically. It's preferable if Lion has farm priority and his squad has outstanding crowd control so they can clump up the enemy to hit with the area of effect.

Mekansm: If no other teammates can successfully use the item, Mekansm is a good item to develop on Lion. Lion's survivability is improved by the added stats and armor, while his teamfight participation is greatly improved by the heal. Lion is also unaffected by the item's high mana cost because he can easily recuperate it with Mana Drain.

Aether Lens: Due to the high cost of Finger of Death, Aether Lens improves Lion's mana pool, allowing him to more easily complete his spell combinations. All of Lion's abilities, notably Hex and Earth Spike for debilitating adversaries, can benefit from the increased cast range. It also extends the cast range of Lion's main item, Blink Dagger.

Scythe of Vyse: The Scythe of Vyse is a costly late-game equipment for any casting-oriented support. It improves Lion's overall stats and decreases his need on Mana Drain while also providing another immediate hard disable to his already fearsome arsenal.

Medallion of Courage: Lion gains additional utility from the Medallion of Courage, as well as a mix of armor and mana regeneration. Lion may utilize the active on gank targets, boosting the damage they receive from allies' physical attacks, as a ranged support with powerful disables. It may also be used on Roshan to lower his armor, and it can be upgraded to a Solar Crest for greater effects.

Dagon: Dagon significantly boosts Lion's nuking capabilities by allowing him to double up on Finger of Death's already fearsome nuking power. It is, however, highly expensive to upgrade and can be mostly worthless if acquired too late in the game, therefore it is best purchased if Lion already has a significant gold advantage and needs to conclude the game early.

Urn of Shadows: Because of Lion's excellent ganking skills, the charges in the Urn of Shadows quickly accrue; these charges may heal friends or do small damage to foes in early engagements.

Ghost Scepter: The Ghost Scepter is very beneficial against low-HP casters like Lion. The ability to escape physical damage for a brief period of time might help Lion survive if an adversary tries to focus him down, allowing him the few seconds he needs to cast his spells. If he gains the gold advantage, he can upgrade it to Ethereal Blade to increase the damage of his nukes.

Eul's Scepter Divinity: may provide Lion with a number of powerful advantages. The item grants him increased movement speed, allowing him to move around more freely, as well as increased intelligence and mana regen to aid him in casting. The active ability may be employed on the adversary as a secondary disable or on Lion himself to grant him temporary invulnerability while eliminating debuffs like silences.

You should determine whether you are going to roam or stick to the lane to protect your teammates from the beginning so that you can buy appropriate equipment. With roaming, when you have 2 control skills, you and your teammates can easily get kills if combined well. With protective lane, if your lane teammates are heroes with good damage ability, you and that person can overwhelm the enemy lane or get kills early.

However, with thin blood and too much armor, the most important thing for you is to choose an appropriate standing position to minimize the damage taken when roaming or laning. During the match phase, you always have to follow the Town portal scroll to support your teammates in time.

This is the extremely frequent roam + gank phase when your team's gankers already have enough levels and basic equipment for ganking, and create space for your carry team to farm to the maximum, or go to that lane to help. It pushes the lane, counter gank if the enemy targets your carry team. Because Lion's mana regeneration is very good, you can gank continuously during this phase (unless you already have the ultimate, it's different).

Depending on the approach distance, you can use Earth Spike (Q) first to hold the enemy and then use Hex (W) to increase the hold time. Finger of Death (R) is a very powerful damage skill, you should launch it early when you are sure that your teammates can get a life or finish the enemy when they have run too far (900 range). When buying equipped with Blink dagger or Force staff, you can actively rush to arrest the enemy so that your teammates run to defeat that bad guy. Remember to plug wards, break wards in this phase regularly.

This stage you go with your teammates, fully ward, use Smoke of Deceit to gank single targets or start a teamfight by surprise, creating conditions to proceed to destroy the opponent's Ancient or push 1 lane, force the opponent to def turret or have to fight. When you have Aghanim's Scepter you will deal a tremendous amount of damage with a cooldown of only 20 seconds.

Your ultimate goal in combat will usually be initiators, supports, nukers, enemy tankers, using Earth Spike. (Q) to lock the enemy so that they don't harm your team in teamfights (and carry guys usually already buy bkb in this stage), or you can make the enemy carry unable to react by focusing your control skills directly on the target, burning the carry health to a low level (or finishing it if your skill is enough damage) so that the target does not dare to rush into combat anymore, creating a favorable situation. event for teammates to finish or corner the enemy team.