Even for creatures of magic, a Dragon with two heads is still considered a monster. Possessing the power of Ice and Fire, cunning and ferocious, the creature named Jakiro has always flowed through the air at will, burning the ground or freezing the battlefield, turning anything that dared to confront. with it, become desolation.

It is said that the Pyrexae Dragon always gives birth to two eggs at the same time. The ferocity of this Dragon made them famous all over the world, right from birth, the two baby Dragons had to start trying to kill its brother/sister. Only the stronger one can survive. This is also the method to ensure the strength of the Dragon Pyrexae.

And then, in the unexpected incident of nature, Jakiro-the monstrous Dragon, hatched from an egg, contained in it all the power of the Dragon Pyrexae. Deep within it's tough Dragon scales, lies the power of Ice and Fire. And since Jakiro was born, none of its enemies can safely survive. 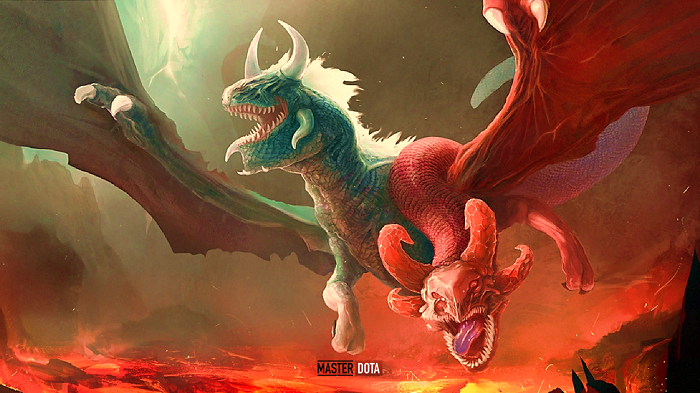 There are always 2 basic ways to increase Jakiro's skills:

Effect: spews a band of ice that deals 50 damage and stuns all units it passes through or touches for 1/1.4/1.8/2.2 seconds while it doesn't melt.

Note: that there is a 0.5 second delay when using skills, so if you feel you are not aligning correctly, you have 0.5 seconds to press the S button to cancel (mana and cooldown will not be counted) to correct. than.

Effect: fires a ball of fire at 1 target (can be used on buildings) then explodes to nearby targets, dealing 12/16/20/24 damage per second and slowing attack speed. of hit targets.

Effect: spews a plume of lava in the target direction, dealing 100/140/180 damage per second for the duration of the lava trail if touched by an enemy.

Apply a frost debuff that slows enemy movement speed by 20%

Boots of Speed: Jakiro's movement speed is increased significantly by the Boots of Speed, allowing him to catch up to fleeing heroes or escape danger himself. They can upgrade to Arcane Boots later on to aid Jakiro with his mana.

Wind Lace: Wind Lace improves Jakiro's slow movement speed and evolves into Eul's Divinity Scepter. Once created, it's also a good idea to get another for increased speed.

Town Portal Scroll: Jakiro is transported across the map using the Town Portal Scroll. Use it after death to rapidly return to the lane and avoid missing out on the creep experience. Carrying one after the laning phase might be useful as an escape device as well as a quick means to assist ally heroes across the battlefield.

Tranquil Boots: Tranquil Boots are a sidegrade to Arcane Boots that provides high HP regen and movement speed rather than mana. To cure any mana concerns, combine with Soul Ring.

Eul's Scepter of Divinity: Eul's Scepter of Divinity offers Jakiro an active ability that lets him to land his abilities more quickly and provides intelligence and mana regeneration at a low cost. Jakiro will have ample time after using Cyclone to set up Macropyre and timing Ice Path to ensure maximum stun duration on the opponent target. Jakiro can also use the active to remove debuffs or silences from himself.

Rod of Atos: Rod of Atos' long-ranged root may be used to set up Ice Path and Jakiro's other abilities, making it a viable alternative to cyclone. Jakiro's efficacy is additionally aided by the extra stats.

Blink Dagger: Blink Dagger makes it easier for Jakiro to start teamfights, as well as allowing him to traverse about the map faster and dodge approaching foes. However, receiving injury will impair your ability to blink for 3 seconds, preventing you from escaping. It may also be upgraded into Arcane Blink in the late game to give cooldown reduction and, more crucially, cast point reduction, which is very useful for Jakiro's abilities.

Force Staff: When contrasted to the Blink Dagger, the Force Staff is more of an escape tool because Jakiro may utilize it while receiving damage. Allies can also use it on Jakiro if they want to track down a kill or get away from danger.

Meteor Hammer: Meteor Hammer is an extremely inexpensive and powerful item for Jakiro's game plan since it does two things: it allows for more complicated Macropyre combinations with Eul's Scepter of Divinity symbol, as well as enabling more destruction of enemy structures in tandem with Eul's Scepter of Divinity and Ice Path, like Nyx Assassin's combination, flawlessly sync when channeled just after the cast point.

Enemies with Status Resistance should be avoided, since they will be able to flee and counter this tactic.

Aghanim's Shard : Jakiro has a new ability called Liquid Frost, which may be utilized to delay foes, siege towers, and deliver Max HP damage at no mana cost and with a short cooldown.

Veil of Discord: The active Magic Weakness of Veil of Discord enhances the magical damage taken by foes from Jakiro's and his teammates' abilities.

Aether Lens: The increased cast range of Aether Lens aids Jakiro in keeping a safe distance during battles. Because practically all of his abilities touch the whole space between him and the maximum cast range, the area in which adversaries can be hit is substantially increased.

Boots of Travel: Boots of Travel may be obtained late in the game for a support Jakiro to provide pressure to opponent lanes that are left undefended. This item may be acquired instead of Arcane Boots by a mid Jakiro, allowing him to retain a global presence throughout the match by simultaneously presenting a persistent threat to opponent map dominance while also helping him to fast farm his other items. The fast movement speed compensates for the longer cast periods.

You should always determine from the beginning of the game whether you are going to roam or stick to the lane to protect the carry, then you will determine the most appropriate way to raise the skill. With lane, you should use Liquid Fire (E) reasonably, don't let it hit the creeps, it will push the creeps on your side and make it difficult for the carry to last hit, remember that Liquid Fire (E) is only to shoot enemy champions or turrets.

With Jakiro roaming, the Ice Path (W) has a very good length (1100) so you can hide from the forest and spit it out to increase the surprise (align to avoid missing) then run out and use Dual Breath (Q) to deal damage and immobilize the enemy. Before doing that, remember to notify that lane teammate to save lives, otherwise the sticky rice will burn or not, if you can't eat your life, you will have a terrible level.

This is when both teams are trying to push the enemy's outer turrets, always keep the Town Portal Scroll in your body to make sure you can push and promptly support the turret and nearby teammates. Remember to fully ward to push as well as gank enemy heroes. Depending on the situation, you and your teammates can mobilize a total push to end the game early if you find that in the late game your team can't win against the opposing team.

At this stage, all heroes on both sides have quite a lot of equipment in general and support like you in particular, so warding in this stage will be easy to forget. Keep this in mind, try to reserve at least 1 slot to store wards, because just a little negligence will lead to your team losing the soldier, even losing at that time.

In total combat, use Ice Path (W) and Macropyre (R) to hit the most enemy champions or to block and divide the enemy squad. With the equipment mentioned in the guide, use Sycther of Vyse to make anyone jump on your team's carry or use Force Staff to rescue depending on the situation, or initiate a fight using Blink Dagger, shoot Liquid Fire (E) and Duel Breath (Q) at the enemy carry to slow its attack speed and stride. That's all you have to do with your gear and skills in teamfights.