50% chance of Anchor Smash on attack

“Who needs a big brain when you’ve got teeth like mine?”

Tidehunter, also known as Leviathan, was the champion of the Sunken isle. However, even with his own people, Tidehunter remains an unpredictable mystery. Most of us know the importance of the Drylander sea route, empires rise or fall to be decided by who owns this sea. Compared to it, the sea lane under the sea and the story of the Meranthic Diaspora tribe are very few people know. What is that tribe? And how did it have to go through countless battles large and small to expand its territory? That's a difficult question for all the inhabitants of the continent.

All we know, through the weak agreements between humanity and the Meranthics, are vague fantasies of some part scale of this underground empire. Having said that, its politics seems incredibly complicated and fraught with controversy. And also because he was disgusted with the meaningless conflicts of that institution, Leviathan left alone, then pledged his allegiance to a single Demon God of the abyss, Maelrawn the Tentacular.

Currently, Leviathan is still patrolling alone in the shallows, looking for anyone who accidentally stood in his way, as well as his 'unlikely' rival - Kunkka the Admiral, whom he had always particularly hated. However, the reason why the two became enemies, was buried in the deep sea long ago with a fierce naval battle. 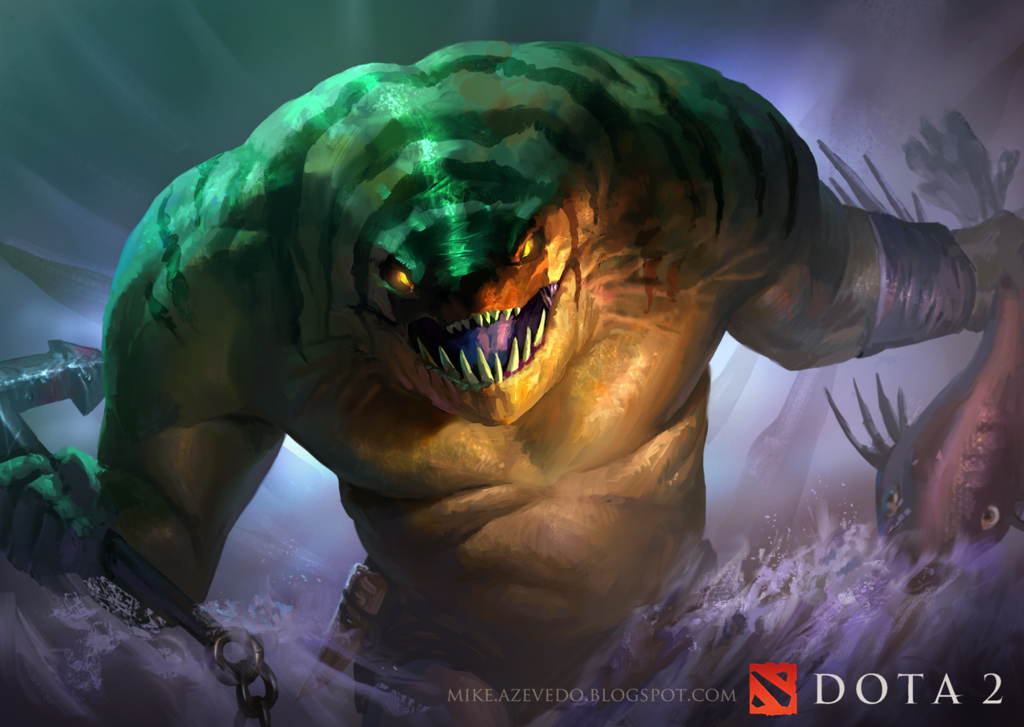 With the first build, you are more inclined to the turret, or you can also enter the jungle early when maxing out the Anchor smash (E) first. Since Gush (Q) slows movement speed by 40% at all ranks for 4s, taking 1 point on this skill should be enough.

As for the second build, you are more inclined to support teammates in the case of dual lane or roam / gank when you spit phlegm on the enemy to slow down and reduce armor for teammates to beat.

The last maximum skill is Kraken shield (W) in the first 3 skills, or you can increase the 2nd maximum after you have accumulated enough points in 1 of the remaining 2 skills if the opponent has too much damage, hand injuries or skills that leave a detrimental buff on you. Ultimate of course get the correct level.

Effect: squirts a powerful jet of water at the target enemy, dealing 110/160/210/260 damage, slowing their movement speed and reducing their armor for a short time.

Effect: he takes 12/24/36/48 damage reduction from basic attacks from units, also when taking damage beyond a certain health, he will cancel all adverse buffs on body

Effect: stomps the ground, dealing 75/125/175/225 damage to the surroundings and reducing the hand damage of the victims hit.

Effect: Summons tentacles of water monsters that radiate around the person from the ground, knocking up enemies in the area, dealing 200/290/380 damage and stunning them.

Boots of Speed: Boots of Speed are required for Tidehunter purchases, whether in the safe or off-lane. More movement speed may be necessary in the off-lane to avoid gank attempts, and in the safe-lane to rapidly position oneself to spell Gush during a gank.

Magic Wand: Tidehunter's stats are improved, and his charge capacity is increased, thanks to the Magic Wand. Given his limited mana pool, a Magic Wand may be used in the same way as a Magic Stick and is useful to have on hand at all times.

Arcane Boots: Arcane Boots expand Tidehunter's limited mana pool, making it easier for him to perform spells and giving him the ability to restore friends' mana, which is a vital role for a support hero.

Blink Dagger: Tidehunter's most significant core item is the Blink Dagger, which allows him to easily position himself to perform Ravage in a teamfight. It also makes it easier for him to pursue down adversaries and cast Gush, and it may be utilized as a means of escape.

Drum of Endurance: Tidehunter gains qualities from Drum of Endurance, including increased mana pool and mobility. During fights, the active enhances the mobility and attack speed of teammates.

Refresher Orb: By casting Refresher Orb twice, friends can increase Ravage's duration, making it simpler for them to alter the tides of a teamfight. However, make sure you have enough mana to pull it off.

Shiva's Guard: Shiva's Guard increases Tidehunter's mana pool, letting him to cast spells more often, while the armor and aura increase his resistance to physical damage. After a successful Ravage, it can activate its active ability, which slows the enemy's movement speed after the extended stun time.

Aghanim's Scepter: Gush's efficacy is considerably increased by Aghanim's Scepter, allowing Tidehunter to use the nuke and debuff on several foes at once. It also boosts his health and mana, making him more tanky and allowing him to use Gush more frequently.

Guardian Greaves: Guardian Greaves is a costly buy, but it dramatically boosts Tidehunter's survivability and allows him to contribute more to teamfights. If the opponent merely places low-damage disables on Tidehunter to avoid proccing Kraken Shell, the active allows him to clear debuffs off of himself, and the HP and mana regeneration are enormous boons for pushes and teamfights. In addition, comrades who are low in armor and HP might benefit greatly from the aura.

Force Staff: Force Staff is a cost-effective mobility item that also functions as a team utility. The increased intelligence helps Tidehunter's mana pool grow, and the active ability may be utilized to better position yourself or allies for spell casting. While it is not as strong as Blink Dagger, it is simpler to construct if you are having difficulty farming.

Pipe of Insight: Pipe of Insight is a potent tank and aura item, since it drastically decreases the amount of magic nuke damage Tidehunter receives, allowing Kraken Shell to be used more effectively. Its active ability also protects colleagues from the effects of magic.

Glimmer Cape: The invisibility and magic resistance of Glimmer Cape may be used to allow Tidehunter to initiate with Ravage without the need of Blink Dagger, or to aid a teammate who has been caught out of position and is being targeted by foes.

Mekansm: Mekansm is a helpful utility item that can be bought as a tank Tidehunter and can be upgraded to Guardian Greaves. In addition to providing him with armor and increased stats, the heal may be quite beneficial to your squad because you are unlikely to die before utilizing it. You can further deter the opponent from attacking you by healing yourself and your team at any moment throughout the engagement, in addition to your overall durability and ability to interrupt the other team's initiation with Ravage. However, keep in mind the high mana cost, and if you plan to create this, be sure to first raise the amount of your mana pool.

Lotus Orb: Lotus Orb provides Tidehunter with a slew of valuable perks as well as a powerful active ability. Tidehunter's armor and HP regen make him even more tanky, while the mana regen keeps his mana pool topped up so he can fire spells more quickly when needed. The Echo Shell damages foes that rely on targeted spells, especially fragile casters with limited HP pools, and the active can dispel debuffs from Tidehunter or an ally.

Desolator: Anchor Smash's damage is increased by Desolator, and it can shred many adversaries' armor.

Solar Crest: Tidehunter's durability is increased by using Solar Crest, which also aids in focusing down priority targets. It may also be used on creeps to speed up the farming process.

Helm of the Dominator: Allies benefit from the Dominator's Helm in terms of attack damage and health restoration. Tidehunter may also manage a neutral creep, giving him access to additional valuable abilities and auras.

Heart of Tarrasque: The Heart of Tarrasque is a costly luxury item to get, but it allows Tidehunter to stand in the heart of a teamfight and withstand a lot of damage, especially thanks to Kraken Shell.

Radiance: Radiance is a situational aura item that can help with tanking and chasing. Its burn damage and induced miss chance can force enemies to engage you in teamfights, casting spells on you rather than teammates, and it can be a useful chasing tool because it allows Tidehunter to damage enemies without pausing to cast spells, as well as prevent any Blink Daggers from coming off cooldown.

At the beginning of the game you can't do anything aggressive, at least you have to wait for lvl 3 when you have 3 skills. You can farm if the conditions are good and you will farm very quickly by maxing out the Anchor smash (E) in the 2nd build, otherwise just build in the 1st basic way. Gush (Q) is a control skill Very useful mechanism to hold the opponent.

When in lane you can sometimes hit Anchor smash (E) to harass the opponent. You need to get to lvl6 as quickly as possible in order to gank with your teammates. You should have the Town portal scroll ready in your body early so that you can reverse lanes to support your teammates in time if they need you. You tank creeps pretty well thanks to two skills Kraken shield (W) and Anchor smash (E) so your problem of staying in lane is quite easy (except in case you get a gank).

Ravage (R) is a very good teamfight opening skill, you can use it in ganks, small teamfights or team rescues.

You should ask for full ward support for effective ganking, or you can do it yourself, that's okay. With Blink dagger, your ganking ability is greatly improved. The Town portal scroll is an indispensable item in your inventory.

You are a tanker, initiator, so it is extremely dangerous to leave the squad at this stage if your teammates are beaten down or forced to fight without people. With Ravage (R) you start the fight extremely easily thanks to its influence.

Then just slam the big hand damage guys and stomp Anchor smash (E) to reduce their damage, Gush (Q) on those who are trying to run away or dive into your team. When you have Refresh orb, you can easily decide the outcome of the fight 2 times using the correct ultimate. Tidehunter is a fairly easy-to-play and win-win hero.