“ Even on this fallen field, I dedicate my powers to the lofty Skywrath.”

Dragonus, a high-ranking mage in the Ghastly Eyrie's court, leads a troubled life. He despises the current Skywrath queen with all his heart, despite being sworn by birth to protect whoever sits within the Nest of Thorns. As a young man, he was a friend and companion to Shendelzare, the eldest Skywrath princess and first in line for the Nest. He had loved her deeply and unwaveringly, but as his studies advanced, his thoughts turned to arcane knowledge and the mastery of Skywrath sorcery.

Obsessed with aetherial matters, he overlooked the mundane signs of courtly treachery that hinted at a plot against Shendelzare, and thus missed the opportunity to foil it. He interrupted his studies to learn that his dearest and oldest friend had been lost to him when a quick and violent coup rocked the court. Dragonus was helpless as the ruthless younger sister of Shendelzare now owned the Nest of Thorns. Acting against the Nest would leave the Skywrath Mage helpless because the magic of the Skywrath Mage only serves the scion of Skywrath, who is its sole beneficiary. He clings to his position because he thinks it is his best chance of one day elevating his true love to her proper position. Only the goddess Scree'auk, through whose power Shendelzare was transformed from a physically crippled being into an embodiment of pure vengeful energy, is aware of his secret at the moment.

While he longs to return his beloved queen to the Ghastly Eyrie, his most desperate wish is to bring Shendelzare back to full physical healing. Being a noble and good-hearted being, the hypocrisy of his role at court tortures him. However, the worst torture of all is imagining the hatred that Vengeful Spirit must harbor for him. 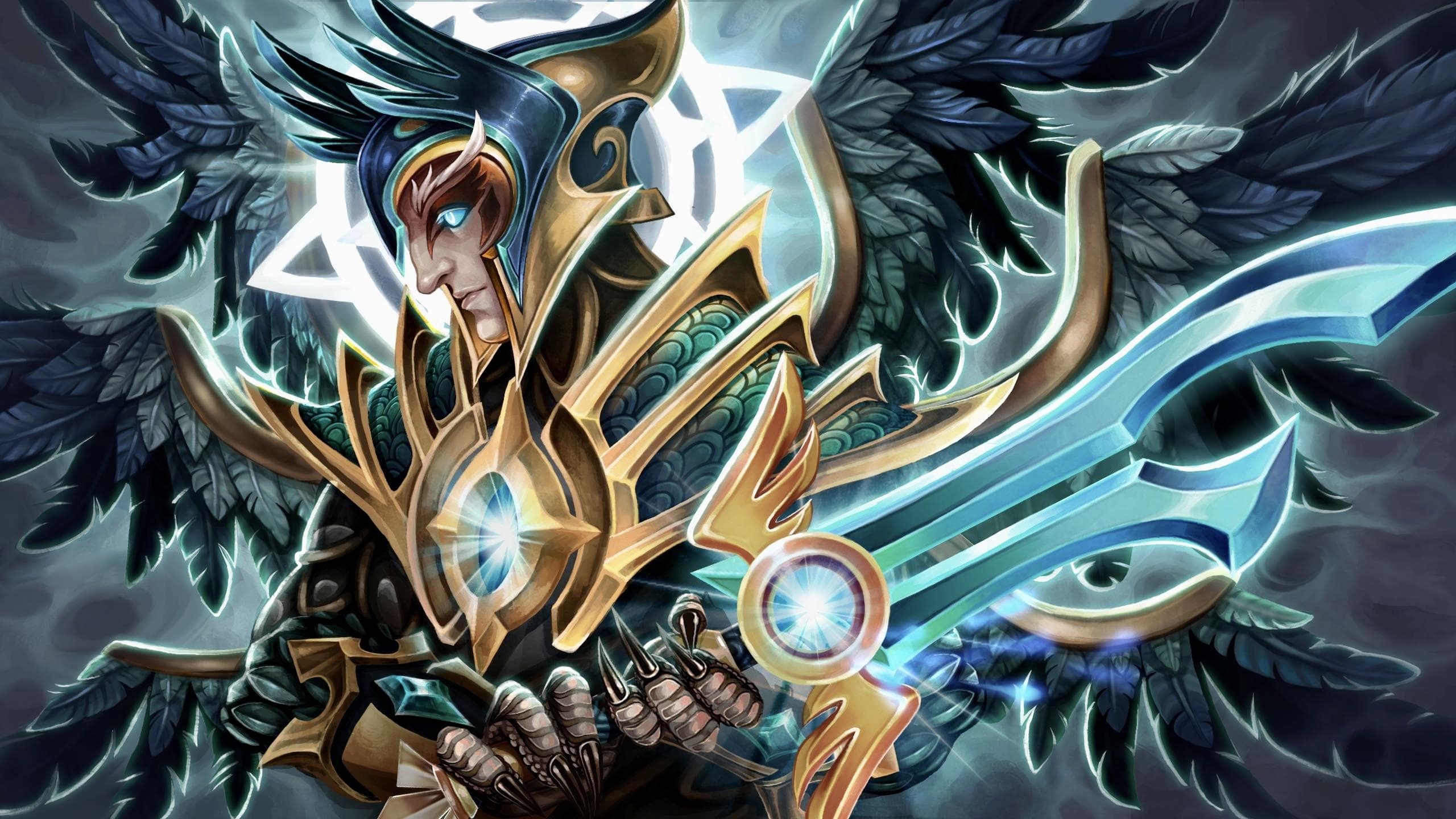 Concussive shots are fired at level 1 due to their slowness, which doesn't get slower as you advance through the levels. Up until levels 12, 13, and 14, it is not leveled again. Since Arcane Bolt is your primary nuke and has a short cooldown, you should max it out first. You should pick it up at levels 2, 3, and 5 and 7. Due to its silence and maxed second, which scales well, ancient seal can be obtained at level 4. It can also be obtained at levels 8, 9, and 10 for its amplify damage. Although Mystic Flare has a significant damage potential, it might not be dependable. You can still take it at the standard 6, 11, and 16. As always stats at 15 and from 17 onward.

Effect: Based on Skywrath Mage's intelligence, it fires a slow-moving bolt of arcane magic that inflicts damage on an enemy unit.

Effect: The closest hero is struck by a long-range shot fired by Skywrath Mage. It slows and causes damage in a field of effect upon impact.

Effect: The targeted unit is sealed with an ancient rune by the Skywrath Mage, which silences it and makes it more susceptible to spell damage.

Effect: Skywrath Mage summons a precise and destructive mystical field that obliterates his enemies using his most powerful magical ability. Deals enormous damage over several seconds that is evenly distributed among all Heroes nearby.

Arcane Boots: Should be acquired as soon as possible because they increase Skywrath's mana pool's size and enable him to occasionally replenish some of it (as well as that of his allies).

Magic Stick: Can quickly replenish some of Skywrath's mana and health. Given his extremely low health, the health replenishment is essential, and the mana replenishment could, in an emergency, allow him to cast one or two more spells.

Magic Wand: Gives the same advantages as a magic stick, plus additional features and more charge storage. It is inexpensive and efficient to construct one of these if Skywrath is given low farm priority.

Rod of Atos: Strength and Intelligence increase the health and mana pools of the Skywrath Mage, who can also trap enemies inside Mystic Flare.

Witch Blade: Provides him with armor, intelligence, and a passive skill that scales into the late game and works well with Arcane Bolt.

Eul’s Scepter of Divinity: Provides a defensive tool, a disable, and much-needed movement speed, intelligence, and mana regeneration. For enhancements to the aforementioned stats, including a more potent defensive tool, Wind Waker can be built.

Scythe of Vyse: A hard disable is excellent for setting up kills for both his spells and his allies, and it grants a sizable bonus to intelligence and mana regeneration.

Ghost Scepter: Stops physical attackers from targeting Skywrath Mage, and with some extra gold, she can upgrade into Ethereal Blade icon.png for a potent nuke and damage-amplifying ability.

Force Staff: Can be used by Skywrath Mage and his allies as a means of escape or to reposition and set up spells.

Blood Stone: Greatly increases the mana pool and survivability of the Skywrath Mage (through raw HP and spell lifesteal). When combined with Spell Lifesteal, the item's active provides strong mana restoration to keep up with his high mana consumption as he deals high spell damage to enemies, ultimately extending his fighting time.

Dagon: Enhances the Skywrath Mage's capacity to decimate targets by boosting his magic damage and intelligence, though the mana and gold costs might be a problem.

Aether Lens: Extends the cast range of Skywrath Mage's spells, replenishes mana, increases safety radius, and allows him to better follow up on Concussive Shot. He can construct an Octarine Core to increase his health, mana, and ability to cast spells more frequently.

Blink Dagger: The Skywrath Mage's ability to position himself for casting spells is greatly improved, allowing him to cast spells with already long ranges. If he can activate it before taking player damage, it can help him sneak up on enemies and kill them with little to no warning or flee from pursuing enemies. Can build into Arcane Blink, which Skywrath Mage can use to increase the duration of Ancient Seal and lessen the excessive mana requirements of his spells.

Kaya: Skywrath Mage's damage output is increased, and his much-needed mana regeneration is amplified (and spell lifesteal, if he has such an item such as Bloodstone). Can develop into Kaya and Sange for increased survival, Yasha and Yasha and Kaya for improved mobility, or Ethereal Blade I for increased offense.

Blade Mail: Reflects a lot of damage back to you.

Infused Raindrop: Blocks a portion of the magic damage that the Skywrath Mage can deal.

In the early game, you should lane with a carry in the safe lane as soon as possible. Your man pool isn't the best, so concentrate on using your auto attacks to harass the enemy and save your combo for when you're going in for the kill. When casting your ult on a fleeing enemy hero, try to cast it behind them with them just on the edge so they have to run through it to get away. You should also try to apply a slow to targets inside the AoE. Alternatively, if they are pursuing something, you might want to cast your ult in front of them with them once more on the edge of the ability so they have to run through it to catch it. Be careful when doing this because they might change their minds while being pursued or running away, and if they do, you will take much less damage from it than if you had simply put them in the middle.

In the mid game, try to roam the map with a stunner or disabler to try to score some kills. In team fights, try to stay on the periphery of the action, use your spells on cooldown, and only auto attack when it is safe to do so. Keep in mind that you are a weak hero with a big range on your spells and a 600 range. Keep your AoE extended and make them endure it. Put your ancient seal on the targeted individuals and slow them all. Use your scythe to remove opponents from the conflict (if a tide hunter is approaching to ravage, get rid of him before he stuns everyone) or to keep opponents under your mystic flare.

Stop roaming and stay with your team in the late game; if you go it alone, you'll be dead in a flash. Instead, concentrate on giving your all in the crucial late game team fights.