Born into a royal family who will inherit the Solar Throne throne. But Mirana gave up all rights to dedicate her life to serve Selemene - Goddess of the Moon. Since then, she has been known as the Princess of the Moon. Mirana roams the Nightsilver Woods, searching for anyone who dares to steal the glorious sacred lotuses from the Silvery Pool which is protected by Selemene, Mirana riding on her familiar companion, an animal. big cats, proud and fearless, in harmony with the moon and cycles of the great constellations. Her bow, inlaid with sharp shards of Vowstones, uses the power of the moon to shoot arrows at the speed of light. 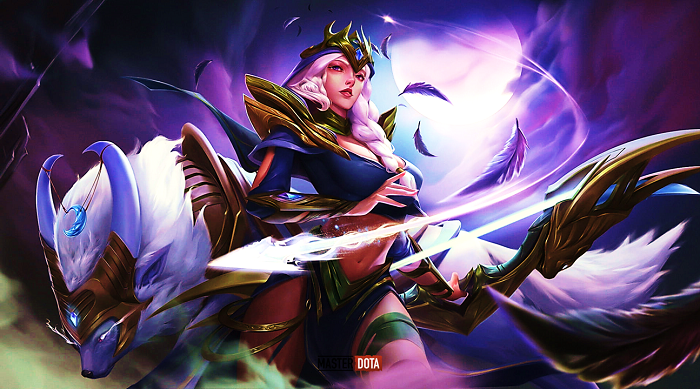 This build is for those of you who are not familiar with the use of Sacred arrow (W) proficiently, so you will get the main source of damage from Starstorm (Q), so maximize this skill first and then Sacred arrow (W) , Leap (E) gets 1lv at the first levels to increase the ability to chase, escape. Ultimate gets the right level to increase gank as well as save teammates' lives when they need it.

Effect: Summons a meteor shower from the sky that deals 75/150/225/300 damage to all enemies around Mirana, a random enemy near her takes 1 extra star meteors deal 75% damage of the first meteor wave.

Effect: Throws a magic arrow in the specified direction, when the arrow collides with an enemy target, it deals 50/140/230/320 damage and deals 1 bonus damage with a stun The target depends on how far the flight is.

Note: damage and stun duration will be maximum when the arrow flies 1500

Effect: Mirana commands her mount to jump forward, when it hits the ground, the beast roars, increasing movement speed and attack speed for nearby allies (including Mirana)

Effect: puts all allied champions (including Mirana) in stealth for a period of time. This stealth will be canceled if an allied champion uses an item, ability, or attack, but will continue to return to stealth until the duration of this skill's effect.

Magic Stick is a wonderful item to get early on Mirana because of her short HP and mana pools, therefore the burst regen is highly important.

Boots of Speed: Mirana may go on the offensive with her boots of speed, attacking and harassing adversaries with her decent basic movement speed and ranged attacks. It also makes casting Sacred Arrow and pursuing after or fleeing with Leap easier to place.

The Bottle replenishes Mirana's mana and health while also allowing her to store runes for later use.

Magic Wand is a low-cost update to Magic Stick that adds new features and more charge storage. Without extra equipment, Mirana's HP and mana pools are rather low, therefore a quick restoration of HP and mana is quite advantageous to her.

Mirana's attack speed and characteristics are boosted by using Power Treads. Mirana can strengthen her strength for greater survivability, agility for increased damage output, or intellect for casting spells with good attribute switching.

Mirana may use Aghanim's Scepter to deal massive burst magical damage to single targets or groups of adversaries, providing her an advantage in teamfights and ganking during the early to mid game. Mirana may now be played as a strong nuker instead of a right-click hero thanks to the Scepter, which provides her great stats across the board and opens up new item options.

Mirana can use the Blink Dagger to position herself exactly on top of an attacker and unleash an enhanced Starstorm.

Butterfly: In Mirana's hands, the butterfly is a formidable carry item. It drastically improves her agility while also increasing her damage and attack speed, greatly increasing the power of her physical assaults. Her survival is increased by the additional evasion, and the active may be employed to assist her mobility in an emergency.

Linken's Sphere: Mirana gains all-around stats from Linken's Sphere, as well as increased HP and mana recovery. Mirana's resilience is further enhanced by Spellblock, which allows her to ignore an enemy's targeted disable, giving her the time she needs to escape with Leap if ganked.

Depending on the foes Mirana is up against, the Black King Bar can be a lifesaver. The item not only provides spell immunity, but it also has the ability to eliminate some debuffs that Manta Style cannot, allowing Mirana to battle and maintain her ground.

Mirana's physical attacks are improved by Diffusal Blade, which increases her agility and allows her assaults to burn mana. Enemies are considerably slowed by the active, making them ideal prey for Sacred Arrow.

Desolator is a powerful mid-game item that allows Mirana to deal greater damage. The armor decrease on enemy targets makes them easy prey for Mirana and her allies because she can stun adversaries for lengthy periods of time with Sacred Arrow and increase allied attack speed with Leap.

Mirana can use the Monkey King Bar as a situational buy to help her combat adversaries that have evasion. Mirana's damage output is improved thanks to enhanced attack damage and Piere procs.

Daedalus: Mirana can take use of her fast attack speed and lay waste to adversaries as Daedalus enhances her attack damage and gives her the potential to inflict critical hits.

Black King Bar: Glimmer Cape or Pipe of Insight may be used to defend an ally struck by Sacred Arrow, while Black King Bar stops her entire combination from functioning.

Manta Style: Because to the illusions and the momentary invulnerability, Manta Style makes Sacred Arrow substantially more difficult to land.

Have you seen the positions of the Sacred arrow (W) in the picture above? Those are the ideal locations and locations for you to shoot the enemy's head, creating conditions for allies to dump the basket. You don't always apply the same machines as above, but you should be creative in your roaming with Mirana, simply because the terrain in Dota2 is quite diverse, making good use of that you will become a god with arrows.

Deadly arrow phases (death arrows - can be understood as arrows out of sight, bringing high mortality). Remember to take the opportunity to check runes as well as enjoy some snacks from the lane you roam if any of the bad guys fall. Starstorm (Q) is a very good skill to deal extra damage + ks (if you want ks ) as long as you have mana left to use. If the enemy is hit too far away, you can use Leap (E) to close.

This is an extremely important period for Mirana when your gankers and support team start to focus on ganking/push. Moonlight shadow (R) is the perfect gank starter, but your team needs to make sure you have good vision control, so it's a good idea to buy the Observer ward with the Sentry ward.

Starstorm (Q) is also quite easy to use to clear minions as well as deal damage to the enemy squad, use Sacred arrow (W) as I instructed above: the more out of sight, the better.

Got yourself a decent amount of equipment in terms of damage and survivability? Well, this is your time to show off your arrow prowess in skirmishes. You only need to stun to hit one target with the maximum time and your team has up to 96.69% chance to win the teamfight (because no idiot can stand 5 seconds stun while your whole team goes into shock dmg unless the team you're too late.

Sacred arrow (W) and Moonlight shadow (R) are your 2 key skills to help your team take the initiative in combat, use them at the right time. If you still have an item slot, you should buy an eye plug, especially a Sentry ward to control vision, make sure that your team is not detected while in stealth to be flipped upside down.