In the anecdotes of Dredger's Bight, Techies' vandalism tops the list of the worst insults. However, Dredger's Blight is now defunct. Both Toterin and the town of Trapper suffered the same fate. In fact, if one were to turn the pages of Techies vandalism, it wouldn't be hard to see that after the arrival of Techies, towns and cities tended to be wiped out.

Like the inevitable catastrophes caused by Techies, the End of Dredger's Bight begins with an invention. Tasked with figuring out how to safely detonate the mines in the mines beneath the city, three bomb-making geniuses Squee, Spleen, and Spoon create the weirdest device ever: a push button. , when used, activates a remote device to ignite the fuse.

Eager to test their new invention, the trio stacked containers filled with explosives, filling every nook and cranny of the tiny workshop with a pile of remote-controlled bombs. From this stockpile, they took out a bomb and buried it in a distant field. After lying under the protective moat, Spleen pressed the detonation button. A moment passed, and everything was still completely silent. Confused, he stood up, pressing the button again and again until an explosion occurred, tearing a hole in the ground. Elated, Squee and Spleen were just about to return home when a shock wave and impulse knocked them over.

The trio was bewildered, their ears still ringing from the sudden explosion, through the black dust, they saw smoke rising from the ruins of what was once a small workshop. Wood and stone fell into the huge crater that was widening. The whole Dredger's Bight shook and began to slide down the mine shaft below while the townspeople fled in panic.

Sitting on the edge of the hole where their home was once, the trio giggled, unconcerned with their neighbors' scorn, and exhilarated by their own potential. There was only one question in their heads now: How to make an explosion bigger than this? 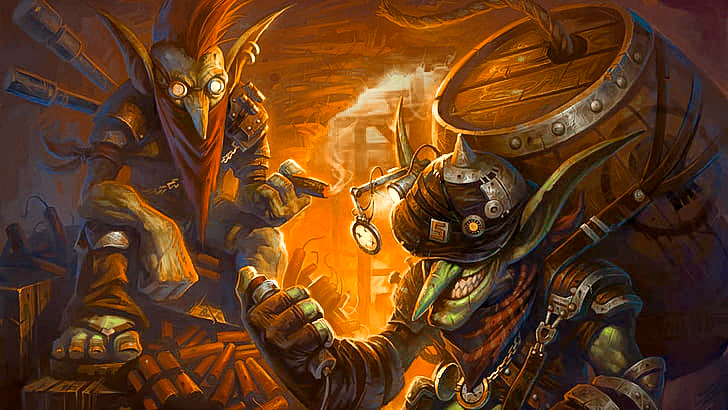 In the early game, the main weapon for Techies is Land Mines (Q) which needs to be maxed first. The large number of mines and the large source of damage instantly kill or cause the unlucky heroes to stomp on them. Next, you should go to Attack (E), Suicide Squad, one of the few skills with high damage. Can be used to get first blood.

In addition, in the mid game, you can go gank with your teammates, use it to deny yourself if caught by the enemy, block them to make money when killing you. Even drag someone to die together. Up behind Stasis Trap (W) does no damage. And Ultimate Remote Mines (R) only get the correct level.

Effect: Plant an invisible mine that is undetectable by True Sight but visible if an opponent within the mine's active 400 AoE. If an adversary stands inside the active AoE for 1.6 seconds, the mines will detonate. The blast does full damage in the blast radius and 30 percent damage to structures.

Max Health as Self Damage: 50%

Effect: Techies slam into the adversary, detonating charges that cause huge area of effect damage and silence adversaries as they do so. The attack deals Techies damage equivalent to 50% of their maximum health when it lands.

Effect: All remote mines in the target region must be detonated.

Effect: Plant a warning sign to advise your adversaries to tread carefully. At any one time, only one sign may exist. This video is 180 seconds long.

Effect: When triggered, plant an invisible bomb that will only detonate after a brief interval. Buildings are not harmed.

Arcane Boots: Arcane Boots work nicely with a Soul Ring to compensate for the mana cost of Techies' mines, or to provide mana for them to utilize Blast Off! without risking dying/getting killed before they can deny themselves. It may be dropped before activating Soul Ring's active to earn additional mana, much like Null Talisman. Techies may also deconstruct it to obtain Energy Booster, which can be used to create Aether Lens or Bloodstone.

Force Staff: Force Staff provides Techies with additional mana and mobility, as well as the ability to force teammates to flee or foes, particularly Gem bearers, into mines and traps.

Eul's Scepter of Divinity: Techies gain a larger mana pool, increased mana regeneration, and increased basic movement speed with Eul's Scepter of Divinity, allowing them to be more mobile and install mines more frequently. In addition, the active ability temporarily disables an adversary, allowing Techies to install mines and traps beneath their feet, or grants temporary invulnerability and a self-dispel.

Aghanim's Scepter: Techies' qualities, health, and mana are all improved by using Aghanim's Scepter. Due to their increased damage, Remote Mines become a much more dangerous menace, and Techies can place them from a greater distance, allowing them to be employed tactically in team battles and allowing Techies to plant traps more safely. Minefield Sign also becomes a viable ability, allowing Techies to utilize it to construct guaranteed undetected traps or deceive the adversary into avoiding an area without mines.

Octarine Core: The cooldown on all Techies' abilities is reduced by Octarine Core, allowing them to lay traps and mines more often.

Sentry Ward: Observer Wards and associated Sentry Wards are revealed by Sentry Ward. By removing their Sentries from the game, you may install traps in locations that they previously thought were secure, and the supports will be forced to acquire more Sentry Wards, which will significantly hinder their item progression.

Bottle: As they frequently pass by runes on their route to set up traps, the Bottle allows wandering Techies to recharge their mana and HP.

Kaya: Kaya gives you more intellect and mana. Additionally, the increased mana regen allows them to place more mines on the map. Kaya can level up to Yasha and Kaya for higher perks and faster mobility.

Ghost Scepter: When the adversary focuses on Techies, they become briefly invulnerable to physical damage, perhaps giving them more time to utilize Blast Off! or lure the enemy into mine traps.

Bloodstone: Techies gain a lot of life and mana from Bloodstone, as well as a lot of regeneration, which allows them to deploy mines more often. Furthermore, the active healer may provide enough time for Techies to Blast Off! away.

Scythe of Vyse: In team fights, Scythe of Vyse gives a lot of mana and a strong disable to lock down threatening adversaries.

Shiva's Guard: Shiva's Guard provides Intelligence and Armor to Techies. In team engagements, the aura and active may be utilized to stymie the opponent by limiting their ability to spread out from your area-of-effect nukes.

Black King Bar: If a Remote Mine/Stasis Trap defense is apparent, Black King Bar can be effective in securely pushing a high-ground.

Heart of Tarrasque: The passive regeneration of the Heart of Tarrasque not only gives a character greater bulk versus Techies' mines, but it also allows that hero to rejoin another mine pit in less time than Techies can produce another pit.

Aeon Disk: Aeon Disk can be used to protect against proximity and distant mine damage.

Eul's Scepter of Divinity: The active ability "Cyclone" on Eul's Scepter of Divinity can fully halt Blast Off! when techies leave the ground and are in the air, squandering his ability and placing it on cooldown. You'll need a rather rapid response time, especially if you don't know where he'll be coming from. Force Staff does the same thing, but moves him in the same way as any other use of force staff would.If you use Eul's, he will continue to charge up and leap without a cooldown penalty, so don't use either while he is charging up and hasn't left the ground. If you use Force Staff while he is still charging, it will not delay the leap or modify his intended destination; instead, it will assist him reach his destination a little quicker, or he will simply jump backwards if you push him past his target destination.

In the early stages of the game, how to play Goblin Techies Dota 2 is quite simple. You just need to buy the starting items and go to Bot lane or Top lane. Then, use the skill Proximity Mines to place as many mines as possible. Wait for the cooldown to finish and continue to order. Put until the creeps come out then you get out of there quickly and good luck.

With this approach, you will be able to farm creeps pretty quickly and a lot. Or you can also place mines in the middle of the road, then lure enemy creeps to just put them in the circle. However, Creep must have less health than Bomb's damage or it will be wasted.

Towards the middle of the game, this will be the moment of glory for Goblin Techies. Thanks to the advantage of farming and pushing turrets. So you will continue to promote these 2 strengths. Place Remote Mines in front and Proximity Mines in the back. When the creeps arrive, that's when Proximity Mines explode. At this point, activate Remote Mines and the creeps will definitely be destroyed.

In addition to farming creeps as above, you also need to use skills skillfully. Especially try to use traps effectively.

In the late game, Goblin Techies are not difficult to complete items in the late stage because of the ability to farm creeps very quickly. However, unlike the mid-game phase, your task is to attack and defend at home. Your Proximity Mines skill can also attack the enemy's hut, so make sure the number of towers that the enemy team is now is not much. You still use the same old tricks, plant lots of bombs and end them with Remote mines damage.