“Knocked ya back to the stone age.”

Starting with life from a small stone, Tiny's origin is a mystery he has always been searching for. Although he was now a giant stone man, the question of his former self was still lingering in his mind. Is a small stone detached from the Golem's heel? Or a crumb left after sculpting Gargoyle? Or just a fragment of Visage from Garthos' prophecy? That curiosity was ingrained in Tiny's mind, prompting him to travel around the world to learn about his own origins, learn about his family, learn about his tribe. In that endless journey, Tiny grew bigger and heavier, the small stones were absorbed and attached to his body became one, and so on and so on. Tiny grew bigger and never stopped. 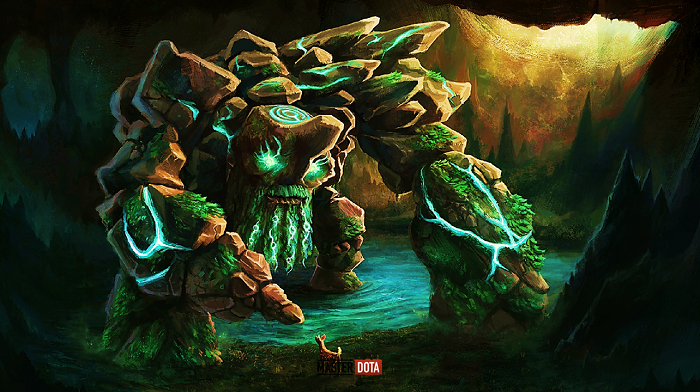 Firstly, get the maximum Toss (W) with Avalanche (Q) for damage, convenient for combos to defeat the opponent and then get the ultimate and passive skills, this build applies to most games. Tiny's role. Building skills for Tiny is very simple and doesn't have to be explained as much as other heroes. For ultimate, you can get the correct level or after you have maxed 2 damage skills.

Effect: Creates an avalanche in the target area, dealing 100/180/260/300 damage and stunning enemy units in the area for 1 second.

Time in the air to impact: 1.3 seconds

Effect: At the penalty of mobility speed, grabs a tree to smack adversaries in the head. Increases the range of your attacks. Attacks deliver extra damage (up against structures) and splash on nearby troops. The tree may be tossed to do damage to a unit from afar.

Effect: Tiny tosses trees in the direction of the targeted aoe. Each tree tossed deals Tiny's attack damage plus a bonus to opponents in that area.

Effect: slightly increases Tiny's armor and enemies that attack Tiny within a 300 radius around him have a 10/15/20/25% chance to be stunned and take damage (including attacking by skill)

Effect: Absorbs rock from nature and becomes bigger. Increases speed, movement speed, damage, but in return he has a reduced attack speed.

Upgraded by Aghanim's Scepter: bonus tree as a weapon, increasing some stats

Effect: The remaining Tree Grab charges are consumed, and the tree is thrown towards the target unit, priming your attack and spraying damage around it.

Magic Stick: Tiny's health and mana are restored by Magic Stick, allowing him to take more damage in lane or use his abilities in a hurry.

Boots of Speed: Tiny can get close to targets and utilize skills on them because of the movement speed increase provided by Boots of Speed.

Bottle: Tiny may use the bottle to get regeneration and mana to power his abilities by storing runes, which can significantly increase his effectiveness when roaming or going mid.

Bracer: Tiny's characteristics are padded by Bracer, which gives him a cheap boost to both his damage and his mana pool for fighting.

Power Treads: Attack speed and suitable qualities are provided by Power Treads. Tiny's skills are sustained when he switches to intelligence, while going to agility gives him extra attack speed to go along with his high attack damage.

Echo Sabre: Tiny's poor attack speed is compensated by Echo Sabre's double attack, which works well with his high attack damage and adds even more burst damage to his arsenal. It also provides much-needed mana restoration and is a relatively inexpensive purchase.

Blink Dagger: The Avalanche and Toss combination is aided by Blink Dagger, which does enormous burst damage to one or more opponent heroes.

Hyperstone: Hyperstone is a less expensive alternative to Echo Sabre, allowing you to go straight to Moon Shard or Cuirass. You can choose a steady attack frequency by postponing your initial ultimate.

Arcane Boots: Arcane Boots will offer enough mana for numerous casts of Toss and Avalanche without depleting your mana pool. An alternative to Power Treads that focuses on gank-caster gameplay.

Moon Shard: Tiny gains a large attack speed boost from Moon Shard, which complements his tremendous attack damage and Tree Grab's splash. Tiny can also ingest the shard to earn an attack speed boost while also freeing up an inventory space for a later game item.

Soul Ring: Tiny may use Soul Ring instead of Bottle as a mana source, making it easier for him to cast his pricey spells for a minimal health cost.

Mask of Madness: Mask of Madness provides a significant attack speed boost as well as cheap lifesteal, allowing him to break teams apart with Tree Grab, while the armor loss is mitigated by Grow.

Sange and Yasha: Tiny's attack speed is increased, allowing him to do more damage. Sange and Yasha give movement speed, strength, and much-needed agility.

Shadow Blade: Attack speed and attack damage enhancements are provided by Shadow Blade, which may be used instead of or in addition to Blink Dagger. When Tiny attacks while in Shadow Walk, he gains invisibility, speeds up his mobility to get in position faster, and does burst physical damage.

You have to wait until level 3 to have enough energy to use it, so don't be aggressive or waste mana in the first levels (unless you are sure the enemy will die when you Toss them into your team's turret). Toss (W) is a rather difficult skill to use if you want to hit the person you want to throw, it is best to lure the enemy to a place where there are no creeps and then use it if you want to deal more damage. Tiny's usual combo is Avalanche (Q), timing and surrounding units to use Toss (W) to throw the enemy to the desired location.

At this stage, you need to manage your mana appropriately to balance farming, pushing, and ganking. Once you have equipped yourself with Shadow blade or Blink dagger, you should gank and push often, not farm in one place, it will be a waste of your skill set. Tiny has the ability to farm very quickly after getting on Aghanim's Scepter, so don't worry too much, but when you go ganking you should pay attention to use Toss (W) so that it's reasonable, lest there will be teammates. Unfortunately, it happened. Town portal scroll is an item you must always carry during this phase.

The goal to achieve at this stage is to end the game with the opponent's Ancient collapsing, and Tiny with Aghanim's Scepter is a true pusher. You can split push 1 lane or participate in a full push with teammates and you push very fast. Try not to get caught alone or unnecessarily aggressive. If you have good support from your teammates, you can fly into the middle of the enemy's formation, use skills and equipment to deal damage then stand to fight, making sure no enemy can stand it. your awesome hand damage.